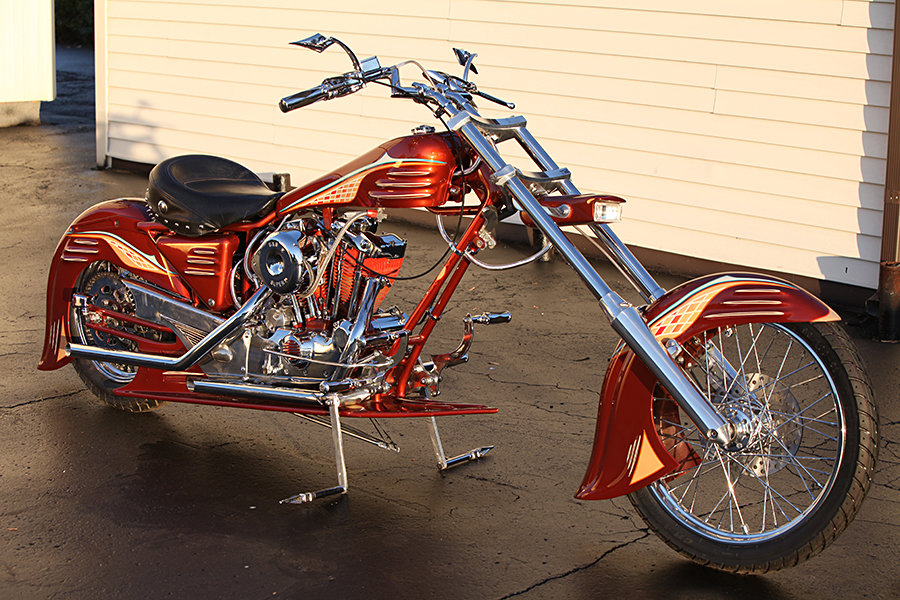 this caught my eyes because it says it was built in year 1972 but it doesn’t look a bit like a 70s issue Harley-Davidson. so this isn’t just any Harley. it is said that this wicked bike was commissioned by and custom-built for Edd “Kookie” Byrnes of 77 Sunset Strip TV fame back in 1975 by custom bike builder, Bad Boys California and named “Conquistador” after the Spanish conquerors of the 1500s. after the completion, body molds linked to this bike were destroyed and thus making this unit a one-of-the-kind motorcycle. but that was then. the bike was subsequently restored with redesigned custom-built ridge frame with a surfboard design (hence the name ‘Surf Bike’) and equipped with a new ‘heart’ – a rebuilt Harley-Davidson V-twin engine with a slight overbore and flat-top pistons that gives it a 1,100-cc capacity. other features include a rebuilt transmission, S&S carburetors and a Big Block high-torque starter.
[ad#Google Adsense-text-468×60]

aesthetically, this bike is definitely a looker:

the 1972 Harley-Davidson “Conquistador” Surf Bike is set to go under the hammer at the Hershey sales organized by RM Auctions from October 6 – 7, 2011 at the Hershey Lodge and is expected fetch between $10,000 to $20,000. check out more images of this awesome custom chopper after the break.