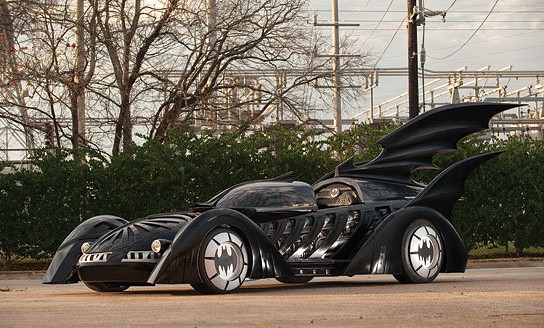 well, you may not be able to own the Batmobile Tumbler until Bob decided to put it up for sale but here’s one road-worthy Batmobile you can truly own (besides the official licensed 60s replica, of course). built as a promotional vehicle for Warner Brothers’ 1995 Batman Forever, this awesome example made its way around the world to promote the film and its next stop might be just any regular folks’ garage. this running and driving batmobile features a custom tubular chassis and a fiberglass body which cost a reported 2.5 million dollars.
[ad#Google Adsense-text-468×60]

this Batmobile sport an awesomely detailed interior complete with loads of switches and gauges that would make a pilot feel at home. we are all grown up, so we know most of the switches and gauges are just replicas (read: dummies) and we are pretty sure, spewing out flame from the rear ‘turbine’ exhaust isn’t part of the check list. nevertheless, it still look awesome. don’t believe? just check out some of the images after the break.

granted, Batman Forever isn’t the fondest Batman movie ever to grace the silver screen but at least it has a ride that we will fondly remember by. the Batman Forever promotional Batmobile is going under the hammer in the upcoming Auctions American (a new subsidiary of RM Auctions) in March 4-6 at Fort Lauderdale.

NOW READ  Batmobile Prop Car From Tim Burton’s 1989 Batman Is Up For Grab!