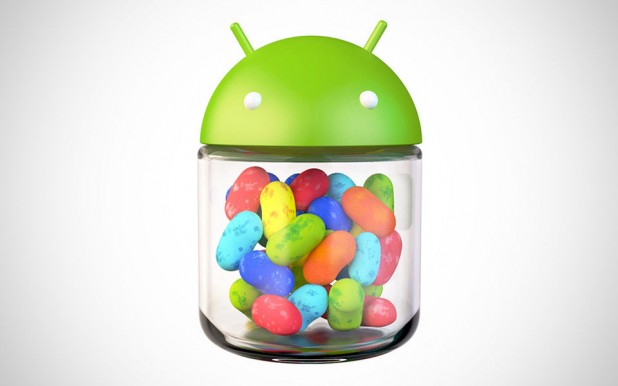 now that Google’s latest OS, Android 4.1 aka Jelly Bean, has started rolling out, we thought we’d run down some of its features for the benefit of those who are still waiting for their over-the-air (OTA) update or folks who are still deliberating whether to update or not. all thanks to its version number of ‘4.1’, many users would expect nothing more than a minor update but this is not the case. in fact, Jelly Bean has some pretty wholesome ‘upgrades’ that should enhanced the user experience. we only hope that the fancy proprietary UI of each individual maker don’t mess it up.

Overview
we have our fair share of Android usages and if there is one thing that bothers us, is the sluggishness in some devices powered by earlier versions of the OS. though there’s a possibility that was due to the custom UI of each individual maker or perhaps, due to underpowered processor. whatever the cause is that results in this perceived sluggishness, Google isn’t going to just let it pass and hence the birth of Android 4.1 Jelly Bean, an update that promised to engage users with smoother and more responsive operations with its new processing framework.

1. General operations
in this update, the OS will attempt to anticipate where the user’s touch will land next for improved touch accuracy and responsiveness. additionally, when the OS detects a long period of inactivity, it will ramp up the processor and readied it for the next anticipated touch, thereby reducing any possible lag.

2. Graphics performance
animation and drawing gets a boost from what’s known as “vsync timing” to achieve a frame rate of up to 60 fps. while triple-buffering offers enhanced rendering that should result in better scrolling, as well as animation. so would it a be a good news for the Galaxy Note?

3. Camera usability updated
camera functionality is the ‘look for’ feature in today’s smartphone, so naturally, it also gets a jolt in term of usability. instead of getting in and out of the Gallery app to review the photos, Jelly Bean offers simple pinch to activate a ‘film strip’ of the photos. once in the ‘film strip’ mode, all you have to do is swipe left or right to scroll through the photos. additionally, trashing of selected photo can be made by just swiping up or down – an action that’s undo-able. a good thing, cos’ we do have our bad-finger days, don’t we? 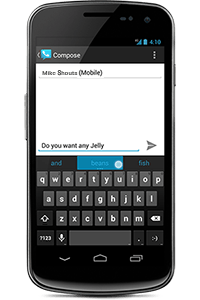 4. It’s all about typing
if you think that typing experience couldn’t be further improved on Android OS, then you are dead wrong. with the Jelly Bean, a refined dictionary and an improved predictive keyboard are added to speed things up a little. this is a improvement that we bet most users wouldn’t take much notice cos’ it is something that’s quite intangible but anyway, anything that improves the user experience is always welcomed – noticeable or not. furthermore, more languages are supported which include Persian, Hindi, and Thai. also new is the voice typing feature, though that will be initially available in US English only with more languages to be added.

5. Home screen
this is a feature that will make us all lazier. how does intelligent resizing of the widget sounds? yeah. the new update will do that if your home screen’s real estate isn’t big enough to accommodate whatever you are placing on it and existing icons will cooperate by moving out of the way if they happens to hinder your widget or icon placement, thus saving yourself the hassle in preparing a space or two for your widget or icon. the new update also makes trashing your icons or widgets easier – all you have to do is to swipe them off the home screen and that’s it. 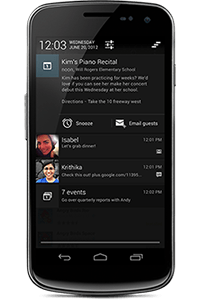 6. Notification
It’s all about making things more convenient for users, speaking of which, you will be greeted with a fresh looking notification tray that will have more information readied for you. features include responding (by call back or message) to missed call directly from the notification tray and view updates of apps without actually have to access the app. again, saving you the hassle of opening and quitting apps.

7. Speak and it shall search
before we get on with the speech part of things, you must know that we are excited about the new search result look. it is now presented in ‘result card’ form which is totally sleek. now, on with the speech part. as the name implies, it is basically searching the web with voice – just speak your search query or ask any question and Android will scour the web and return you with query results with in speech. this search is powered by Knowledge Graph for precise answer – if it knows it and even ranked them accurately.

8. Google Now (your personal concierge… well, sort of)
well, this feature might not be the wants for everyone as it involves Google dabbling into your personal information. it’s like a personal assistant that utilizes your personal data within your smartphone to help you get through the day. as such, Google will grab your commuting habits, logs your search and get to know more about you (in addition to what’s already in your phone), so that it can better recommend you stuff and the likes. one such example is providing public transit info when you are in the vicinity of say, a train station. we guess how this feature is going to benefit you (or not) needs no further explanation and like we said, not everyone fancy being snooped at.

9. Captain Kirk, let’s beam it up
before we go on, this feature calls for NFC-capable devices and therefore you will need to have two NFC-enabled Android devices to work. other than that, the functionality is pretty straightforward: all you have to do is to get two NFC-enabled Android devices back-to-back then tap to beam whatever is on the screen – photos, videos, contacts, web pages, directions or whatever. it also support simple pairing with Bluetooth devices such as headsets or speakers just by tapping them together but this only work if those devices support the Simple Secure Pairing standard. it is, nevertheless, a good start. boy, do i hate going through the Bluetooth pairing process.

so there you have it, 9 things that you should know about Jelly Bean which we hope will help you in understanding what you are diving into. this list is in no way exhaustive but it does however, highlight some of the interesting and useful features of the Google Android 4.1 Jelly Bean Operating System.