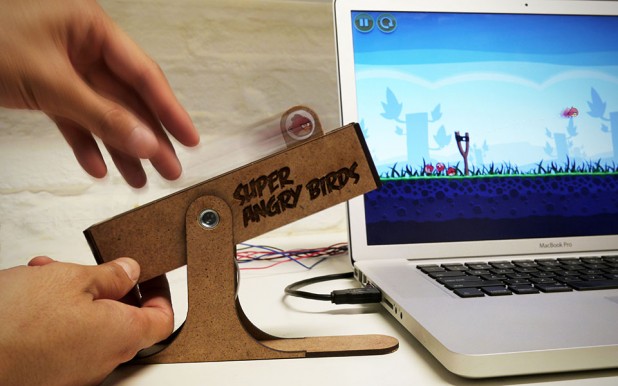 a few months ago we saw an enthusiast-built Angry Birds USB Slingshot modeled after a real life slingshot. it was such an awesome creation that make a non-angry avian fan like me wanted to pick up the game on PC. however, it fall short of being a reality. a reality, as in something that we could use our hard earn cash in exchange for one. as hopes fade, we witness yet another making of the Angry Birds controller, dubbed the Super Angry Birds Controller. it is a force feedback USB device that simulates a real slingshot and has every control found in the game, including pulling, angling and the subsequent launching, plus a TNT-style trigger for activating the special power of the bird. though it may not excel in the aesthetic department as compared to the slingshot iteration but its working is definitely way more cooler. created by Hideaki Matsui and Andrew Spitz as part of their class on Haptics at the Copenhagen Institute of Interaction Design (CIID), the controller incorporates a hacked motorized fader, commonly found in audio mixing consoles, to induce the force feedback, an Arduino-based microcontroller (known as the Music & Motors) developed by CIID to manage the hardware and a mix of Max/MSP and Arduino programming weaves the controller together. awesome stuff, especially with the TNT thingy. check out a video of the Super Angry Birds Controller in action after the break.