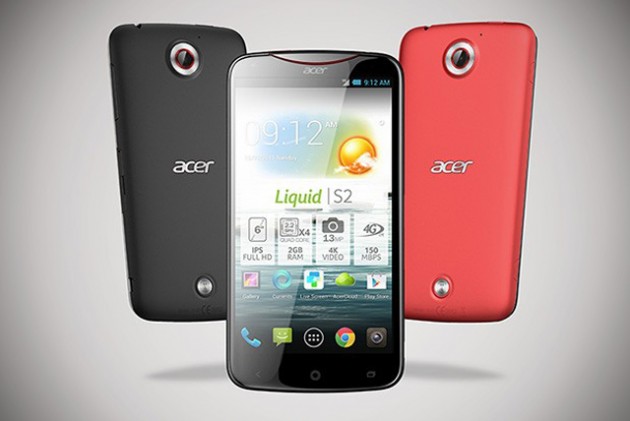 when it comes to Android handsets, they are pretty much the same and the one to stand out is the one that rocks the market with another “first” like this Acer Liquid S2 Smartphone, which is claiming the title of the world’s first 4K-recording smartphone – well, at least for now. you know how it is – the ‘first’ title are so “volatile” these days cos’ it could be gone in jiffy in the ultra competitive smartphone arena. the S2 is a huge handset – it is touting a Full HD 6″ IPS display packing 368 ppi, along with loads of pretty high-end stuff, starting with a quad-core Qualcomm Snapdragon 800 processor, clocking at 2.2GHz, backed by 2GB of RAM. obviously, the 4K recording is the star of the show and so naturally, you can expect a pretty awesome main shooter and in this case, it is a 13MP BSI item with LED ring flash.

from what we have read, the main camera is pretty accomplished with separate adjustment for focus and exposure, fast Full HD recording, 4x slow motion, as well as capturing full panorama 27MP stills. other notable features include a 2MP f2.2 front-facing camera (Full HD videoing capable), 16GB onboard storage, a non-removable 3,300 mAh lithium polymer battery, WiFi, Bluetooth, NFC, 4G-LTE, plus the usuals host of sensors. the Acer Liquid S2 Smartphone will be running on Android 4.2.2 (Acer-flavored, naturally) at launch which should be happening sometime end of October. pricing is still unknown at this point which shouldn’t come as a surprise cos’ smartphones are mostly tie to telco’s customer agreement which could varies quite a bit depending on the plans.