It is good to know that there are folks out there who are thinking about other uses of drones for purposes other than sniffing out threat, delivering beer, pizza or other frivolous products. Late last month, we ran a news about DHL’s pilot program to deliver medication using a specially designed drone to Island of Juist in Germany, and today we stumble yet another aspiring development: the Ambulance Drone. The brainchild of Dutch-based Belgian engineering graduate Alec Momont, this six-rotor “ambulance” is not an ambulance per se, instead, it an autonomous flying defibrillator that could reach out to heart attack victims within life-saving minutes. 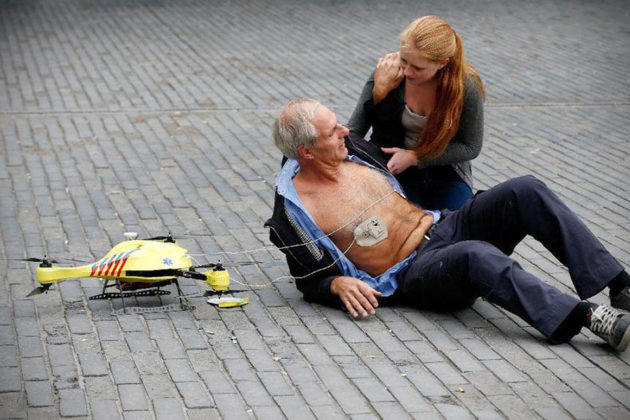 The drone, capable of topping 100 km/h (62 mph), is able to get the life-saving defibrillator to a patient within a 12 square kilometer (4.6 square miles) zone within a minute. It is not clear how far it can actually fly and if this flying life-saver could go beyond the 12 square kilometer example. Also, how fast it can get to its intended destination depends very much on factors like the weather and time of the day. It uses GPS to track emergency calls made via mobile and navigates to the patient. Though we not sure how it will work out for calls made through landline. With regard to that, we trust that the creator will be looking into how to lock on to the victim’s location when called through non-trackable communication device.

NOW READ  Bluetti AC300 And B300 Power Station Combo: It Could Be The Perfect Setup For Rich Preppers And Campers

Anyways, once the drone arrived at the scene, the onboard camera connected to the control room will allow the drone operator, presumably a paramedic, to see, communicate and offers instruction to those assisting the victim on the use of the defibrillator. The Ambulance Drone may not be a foolproof solution, but it could provide the first response in the quickest time possible to stop tragedy from happening before actual helps arrive. However, the defibrillator is just part of a bigger plan Momont has in mind. He envisioned the Ambulance Drone to one day become a “flying medical toolbox” that could also carry oxygen mask or even an insulin injection kit to address emergencies beyond heart attack victims.

As far as realization goes, the drone is still very much in its infancy with technical issue to be further addressed and that’s not to mention the legality side of things with regard of drone flight. Still, Momont is hopeful and is working to have an operational emergency drone network spread throughout the Netherlands in five years time. However, with an expected cost of around 15,000 euros per drone, Alex Momont will need to overcome more than just legal and technical issues.