As far as the Internet is concerned, no one’s privacy is safe. This is an area where a host of security solutions, both hardware and software, aim to address. Speaking of security solutions, you’d be hard pressed not to hear about Anonabox. This pocket-size, hardware solution has rolled in more funding pledge than you can shake a stick at, not withstanding the fact that it has garnered much controversy from the very beginning. However, we shan’t dwell in it as that was pretty much water under the bridge. Now that the Anonabox is already available for months now, we are going take a dive into the anonymous world and experience it for ourselves.

Though it is important to note that we are taking it for spin as an everyday person, not as some anonymous hackers who could break through a firewall thicker than Switzerland’s Sonnenberg Tunnel blast doors, figuratively speaking, of course, or one who’s capable of taking a “digital stroll” in NSA’s secured servers without breaking a sweat.

What exactly is Tor?
If you are reading this, we are assuming that you already have some idea what Tor is. If not here’s a quick run-down to get you up to speed. Tor, which is basically short for The Onion Router, is a free system that affords anonymous communication by directing internet traffic through a free, worldwide, volunteer network made up of thousand of relays. In this way, prying eyes will have a hard time digging where you are actually from.

It is kind of like a person switching cars along the way to throw off his or her followers. It sounds like a foolproof solution (though we want to stress that nothing is 100% foolproof), unless you input personal details into websites that you are visiting. Now that we have gotten the basic out of the way, lets take a look at this nifty little piece of hardware.

Anonabox – What is it and what it can do
We have two security routers at hand: The Anonabox Fawkes WiFi Tor Router and Tunneler WiFi VPN Router. We are going to take a look at the former today. Before that, you are probably asking, what the heck is Anonabox? Well, simply put, Anonabox is a pocket-size hardware that offers you access to the Tor network without messing with the software end. It presents itself as a solution for Internet anonymity on-the-go, which means accessing public WiFi without jeopardizing your anonymous status when you go about digging the deep end of the web, but like we said, it won’t help if you are offering your personal details (that’s suicidal as far as anonymity goes).

Sure, you could always download Tor for free and set it up, but as we have said, we are assuming the role of an everyday user who probably would be bothered or even have the know-how to deal with the setting up. Anonabox offers a plug-and-play solution, well, kind of, providing you with an Ethernet port to hook up with your PC or laptop, or create a secure Tor WiFi hotspot, complete with password protection. The latter will also allows other devices, such as your tablet or smartphone, to enjoy anonymous web experience through Tor network. 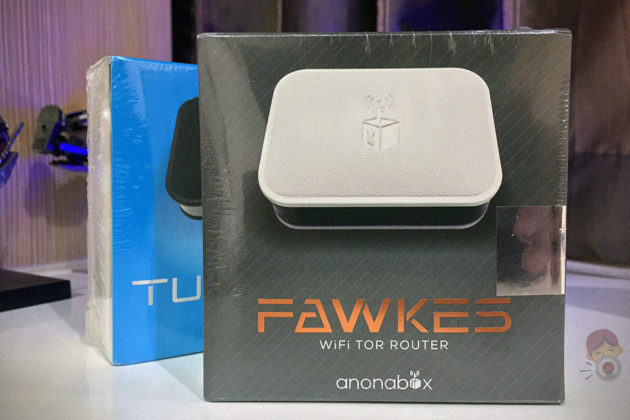 Anonabox – The packaging
Anonabox, both the WiFi Tor Router and the WiFi VPN Router, comes shrink-wrapped in a neat box slightly bigger than an Apple TV. Each box comes with its own security seal placed in a manner so that there’s no way you can open the box without destroying the seal. This ensures that the router will not be tampered with while en route to you. It may sound overly paranoia, but hey, its always better be safe than sorry, especially if you are particularly uptight about your personal online anonymity, cos’ you never know if someone with ill intention may have plotted to rig your secured router to gain access to all of your Internet activities.

Breaking the seal and pulling out the inside box, you will find the manual, a USB power cable and of course, the Anonabox. Like any router, it requires power, which will be fed via USB with the supplied cable. You can plug it to your router’s USB port, if it has one, or plug it to your PC or laptop’s USB port. Or if you want, you can use a USB power adapter. Though the latter is not supplied. 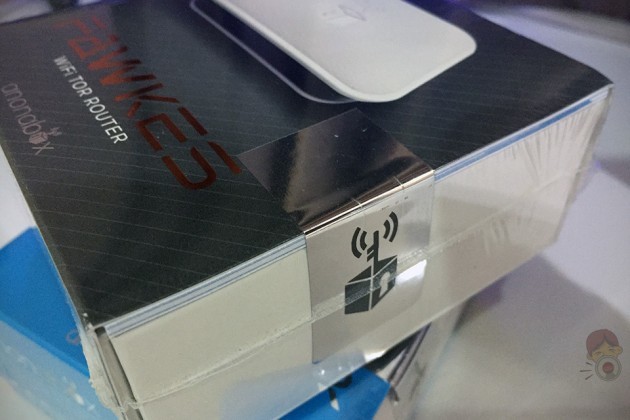 Anonabox – Setting up and connecting to Tor
It is not exactly a plug-and-play solution per se, but I would think this is as close as you could get (probably). That said, you essentially need to play by the instruction, which is fairly straightforward. First, you need give it power, which I use my iMac’s USB power. After that, you will have to do some tinkering with interface, setting up the password and whatnot. Speaking of password, Anonabox does allow you to set your own password and you can also name the SSID, aka wireless signal name, to whatever you desire (like ‘get-lost-its-private’, which is what I have set). However, it still can’t hide your broadcast, which means everyone will know you have something to hide. As for as wireless is concerned, it offers a few encryption types, including WPA2-PSK.

NOW READ  6 Good Reasons To Get A VPN 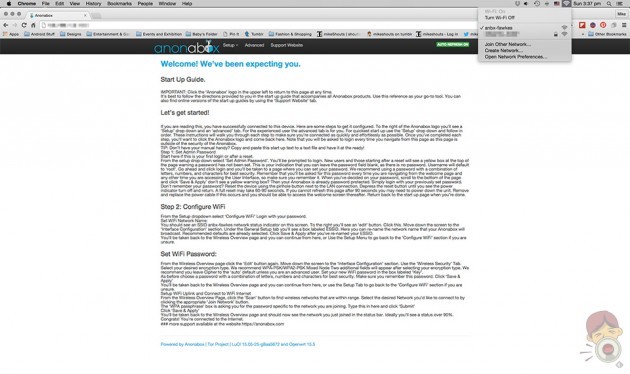 Following the instructions (which is simple as hell, if we might add), you will be connected to the Internet in a matter of minutes. Oh ok, maybe not a few minutes, but perhaps, like 5-10? You can choose to use the WLAN port to link up with your existing modem/router or via wireless. We opted for the latter and it went without a hitch. Though WiFi way will required a little more setting up to do. Once done, you can confirm your Internet connection by firing up your browser to test.

If you want the ultimate in web anonymity and get access to the dark side of the web, you will need to get Tor going. This part is the easiest. With a couple of click on the user interface and a wait of around 5 minutes, it will be on Tor. That’s, of course, provided that Internet connection is setup probably. A check with the Tor Project page confirmed that I was indeed on Tor. You can also confirm by hitting .onion websites and also check up your IP. If you are using Tor browser (recommended), you will also see where your Internet data are being routed through.

All told, it should not take no more than 10-15 minutes – that’s provided you have everything you need easily accessible. For my case, I did spend a fair bit of time digging for an Ethernet cable and the router was kind of out of the way which adds up to the setup time and that’s not mention I was taking photos and videos along the way. So like I said, if you follow the instruction to the tee, you should be up and running in 15 minutes or less. 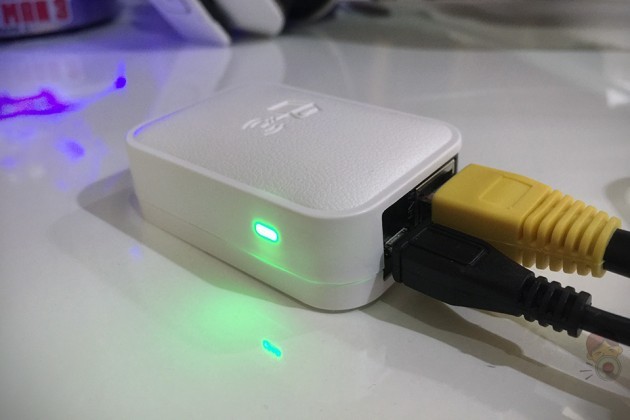 Our verdict
From an everyday user perspective, Anonabox does what it has advertised, but I won’t describe it as a walk in the park as far as setting up is concerned. You do need to do some basic setup and keeping in mind that even this basic setup could be hurdle for anyone who has zero experience in dealing with home network. Luckily, this was somewhat saved by the concise instructions. If that even can’t get a zero knowledge person going, we don’t know what will. The point is, it works as it should and it is portable, which makes maintaining Internet anonymity on-the-go a breeze. Though you have to understand that in the world of Internet security, nothing is 100% foolproof and everything hardware/software could have flaws.

However, as far as preventing Big Brother or your arch nemesis (if you have one) from breathing down your virtual neck, this is perhaps the easiest solution any layman can look to. That said, it is not a one-box-solution and will never be. The world of privacy and anonymity is a complex business and it is virtually impossible for an everyday user to be able to completely conceal their Internet footprints and hence, the use of such device is, as always, at your own risk. But for those who are curious about Tor network and would like to learn more, Anonabox can prove to be a good place to start. However, at $89.99 a pop, you have to ask yourself, how important it is that you need your tracks to be covered and will the availability of Tor provide any value add to your internet usage habit.

If you think Anonabox WiFi Tor Router is for you, you can acquire it from Anonabox website, or hit up Amazon, which is selling it at $74.53. We shall reserve the WiFi VPN Tunneler for another time.