Well, what do you know? It turns out that Aer, the arrow-like contraption that lets you throw your GoPro, was not the first. Unbeknownst to us, Birdie had a head start back in June when it successfully concluded an Indiegogo campaign. I know what you are thinking, but no, I don’t think the idea was copied. Lets just say that great minds think alike, besides the idea maybe the same, but the execution is completely different and we kind of dig Birdie. Why? Because, parachute. Ok, maybe not that kind of parachute you have in mind. However, it does have air-brake of sort that stabilizes the fall so your GoPro can capture awesome, candid shots. 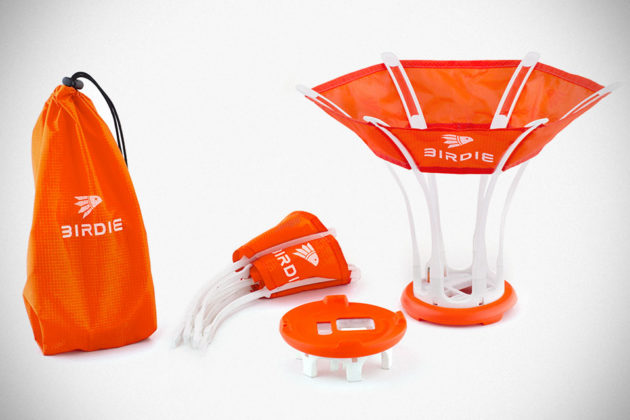 Like Aer, all you have to do is to install your GoPro HERO 3+ or 4 into the case located at the ‘nose’ and toss this little bugger into the air. But do make sure you had the camera rolling or else it would be all but wasted effort. Anywho, assuming you did hit the shutter, your GoPro will be recording all the way up to the maximum altitude and back down. You can keep doing it and eventually, if so desire, edit them into one awesome footage. Or you could set your GoPro to capture stills too, as many folks have done since getting their Birdie. Birdie is super light and can be compactly disassembled for ease of transport. As of this writing Birdie only supports GoPro HERO 3+ and HERO 4, but it will be supporting the newer HERO 5 later this year.

The crowdfunding campaign maybe over, but you can still acquire a unit or two through Amazon for only $49. Skip past the jump to catch a short clip of Birdie in action to convince yourself why you need a Birdie in your life.