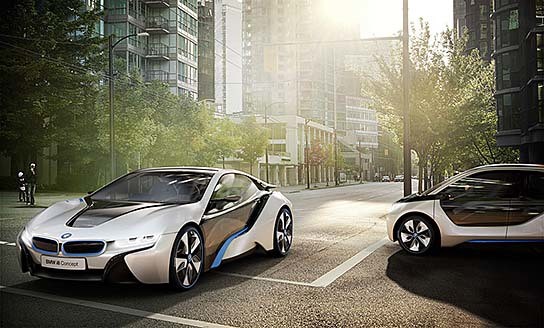 late last month, BMW took the wraps off its pair of electric cars that look more like cars that pops straight out from sci-fi movie sets. the duo, namely i3 and i8 are no longer concepts and are cars consumers could be seeing in near future. honestly speaking, we have heard and seen many electric cars but none has the “look of the future”, so to speak. but the i Series is what future electric cars should really look like. no less. first off is the i3 hatchback that has a combination of aluminum and carbon fiber-reinforced plastics for its body, while an electric drive train that is said to developed 170 horses (126 kW) and 244 Nm (180 lb-ft) of torque propels it to a top speed of 150 km/h (93 mph) and a century sprint of under eight seconds. the i3 could make anything from 80-100 miles per charge.
[ad#Google Adsense-text-468×60]

on the end of the spectrum is the four-wheel drive i8, a sweeping coupe that is a plug-in hybrid. taking on the internal combustion duty is a 1.5-liter turbocharged three-cylinder engine that puts out 220 horses (164 kW) and 299 Nm (221 lb-ft) of torque. when combined with the electric motor, it is capable of achieving the century mark in under five seconds. apart from its good look, the BMW i8 also claims a perfect 50/50 weight distribution. the concepts unveiled are definitely eye-catching and every inch of them speaks future but will the eventual production models look anything like them? that part, however, remains to be seen. whatever it is, treat yourself to a couple of videos and a few more images of the gorgeous i Series after the jump.