Boeing is most notable for commercial and military aircraft, but unbeknownst to some, it also dabbles in watercraft, specifically underwater systems, for over 50 years now. The company’s latest development is a 51-foot Echo Voyager, an unmanned undersea vehicle, that’s design to operate autonomously for months on end. Prior to Echo Voyager, Boeing has two other UUVs, the 32-ft Echo Seeker and the 18-ft Echo Ranger. But in the eyes Boeing, the duo are just “testbeds” as they have an effective mission period of two-three days and both requires a surface ship for launch and recovery. Clearly, those aren’t the ideal feature set in today’s context. 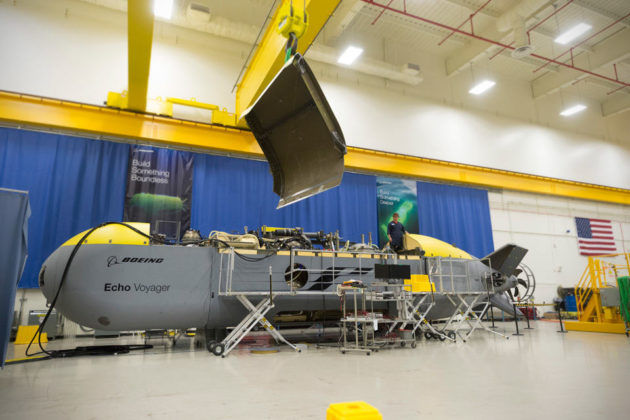 This is where Echo Voyager stands out. Not only can it carry out mission for weeks, or even months each time, but it negates the need for launch and recovery by surface vessel and can set off right from the dock like any other seafaring vessels. It’s endurance is made possible through a hybrid rechargeable power system and the only time it needs to surface is when it needs to deploy the onboard folding antenna to transmit data to its users. So what use has it got for an unmanned undersea vehicle like Echo Voyager? Well, Boeing envisioned the use that goes beyond the usual military applications and, for tasks like collecting data in the sea, as well as subsea sea search and reconnaissance. Basically, what Boeing expect is a platform that can be easily adapted to different missions as required by its clients.

The Echo Voyager is expected to begin sea trials off the California coast later this summer. Continue reading for a clip where Lance Towers, Director of Sea & Land of Boeing Phantom Works, explains the key strategic values of the Echo Voyager UUV.