the revitalized Playstation Vita touting a slimmer and lighter design is finally heading to North America this spring, and will be offered bundled with first-person role-playing shooter Borderlands 2. officially dubbed Borderlands 2 Limited Edition Playstation Vita Bundle, the package will include a copy of Borderlands 2 with six DLC packs and an 8GB PS Vita memory card. the refreshed hardware touts a redesigned architecture that affords about 20 percent slimmer form factor and approximately 15 percent lighter over the original model. ergonomics of the new portable gaming device has also improved with new rounded edges for even more comfortable holding.

other improvements include a longer battery life, boasting up to six hours of game play and up to seven hours of video playback, a high-definition LCD for vivid and crisp visuals, and last but not least, it now comes with 1GB memory card, allowing you to enjoy the games out-of-the-box without having to acquire a PS Vita memory card. additionally, the Vita also touts the ability to play PS4 games through Remote Play, and for those who crave for even more gaming titles will be glad to know that a new service for streaming Playstation 3 titles to PS Vita will be launching later this year. the Borderlands 2 Limited Edition Playstation Vita Bundle is set to retail for $199.99 when it hit the stores in the coming months. a look at the bundle package after the break. 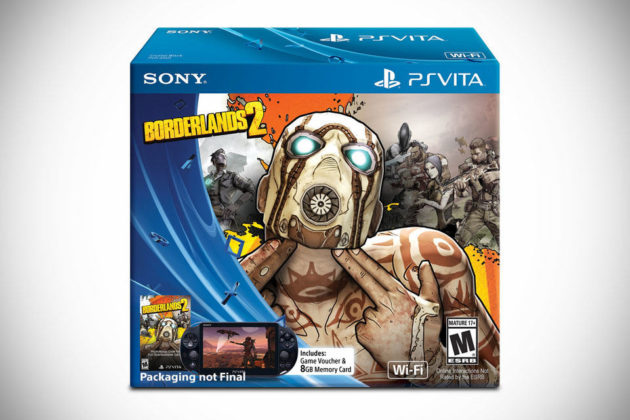