With the popularity of Bluetooth speakers and portable media players, it is only a matter of time that audio mixers go mobile too. When we said mobile, we do not just mean luggage size kind of portable, but rather, one that can slip easily into a backpack or even a pocket and the Braven Fuse Portable Audio Mixer you see here is one such device. Introduced at the International CES 2015, Fuse boasts multiple Bluetooth connections, thus allowing it to be wirelessly hooked up with two audio sources and two speakers, simultaneously. Once connected, you can then play DJ on-the-go, fading and mixing multiple audio streams to create custom tracks and/or splice songs pulled from different devices. The device is not much different from a full-size rig, just that it is a little streamlined to suit on-the-road usage. 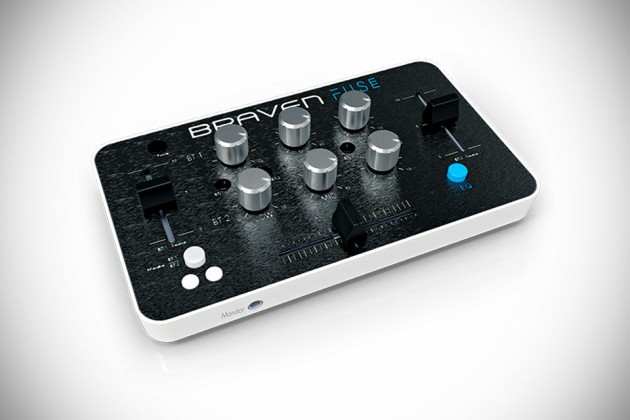 Barely five inches long, it is well equipped with an array of controls, including individual volume, low, mid, and high tuners for each audio source. Other details include source level equalizer, multiple line-in and line-out audio jacks for non-Bluetooth sources and speakers, cross-fader for music mash-up, a 1,200 mAh rechargeable battery for over 12 hours of non-stop music mashups, and finally, a mandatory headphone out switch so you can listen between audio sources, just like you would with a regular size DJ rig. The Braven Fuse Portable Audio Mixer is being demoed at Booth #5116, Las Vegas Convention Center North Hall during CES 2015 and will eventually be available in Q2 of 2015 for $99.99.