If there’s one thing Israel is known for, it would be the country’s striving military industry. The country’s military sector has turned up quite number of military hardware that have well proven their worth. Among those hardware is the Merkava Main Battle Tank, a fearsome armored fighting vehicle that was tailored made for the Israel Defence Force. But, however it has proven itself, the Merkava time must come to an end in face of emerging threats and when it eventually does come to an end, the Carmel platform will be its successor.

The Carmel platform, which was shown off in a simulation back in May, is super lightweight and compact armored vehicle that will boast a silent power plant for stealth missions and in addition to its main armament, a medium caliber gun or a remote machine gun turret, it will also get a rocket launcher designed to counter incoming anti-tank threats like anti-tank missiles. Interestingly, this high-tech next-generation tank is designed to be operated by just two crew, as opposed to four on the Merkava. In order to achieve minimum crew operation while ensuring crew survivability, Carmel Tank will get a touch-operated cabin screen, as well as enabling 360 vision for the crew. 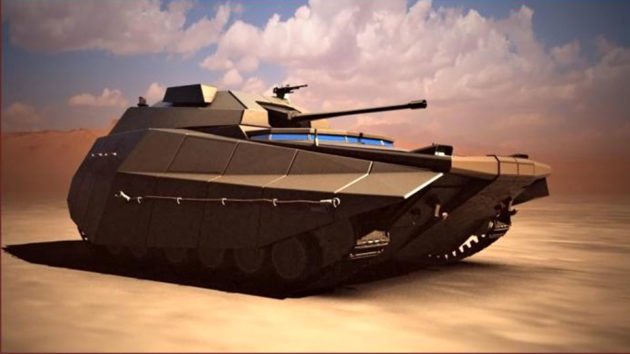 Elbit Systems, the company behind the helmet-mounted display system for F-35s, along with Rafael and IAI, are working towards the realization of this high-tech system for Carmel tank. According to a report, Rafael will be working on the ‘transparent cockpit’ while Elbit will be implementing the helmet system to achieve the aforementioned 360 vision. IAI, on the other hand, is looking at a combination of both solutions to enable a “transparent” cockpit. Additionally, in simulation presentation, which was presented by Brigadier General (Res.) Didi Ben-Yoash, former Chief IDF Armored Corps Officer, it was hinted that the tank will take on the semi-autonomous route.

According to a report by Israel Defense, in order to realize a two-man operation combat tank, a “revolutionary decision-support system” will be implemented in which the system is expect to execute “most of the activities currently carried out by crewmen. These activities include autonomous navigation and driving, target spotting, aiming, and even to the extend of independent firing whenever possible. At this point, Project Camel is still at its infancy, but it is expected to see fruition in three years time. That being said, the only visual of what this multi-platform, lightweight armored vehicle will look like is unknown. The only visual we have as of now is the rendered CGI of the vehicle as provided with the presentation.

Images and source via Vocativ.