You know CASIO G-Shock? Of course you know. Now, do you know Robert Geller? The German-born American fashion designer? Yeah, that dude who had previously partnered on five consecutive runway presentations at New York Fashion Week: Men’s. Well, if you are fan of both brands, or simply a G-Shock collector, you’d be glad that the two brands have come together to create a limited edition G-Shock watch under the G-STEEL line, said to be “inspired by the urban elements in Tokyo.” If you don’t already know, Geller has this thing for Japanese culture and have had spent the last ten years producing his label’s ready-to-wear collection in Japan. 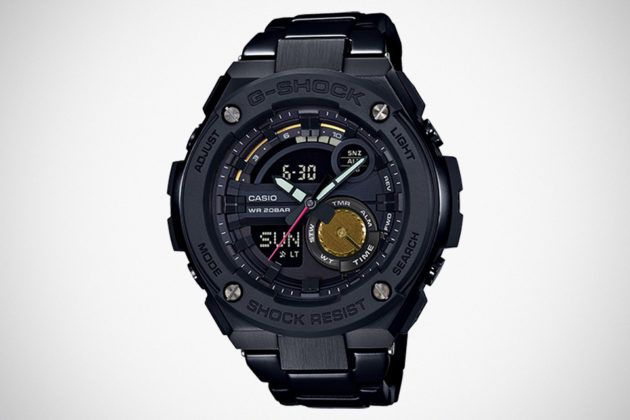 The timepiece, the CASIO G-Shock Limited Edition G-Shock (GST200RBG-1) by Robert Geller is the first collaborative timepiece between the two brands and it bears the design as envisioned by the fashion designer who kind of grew up wearing G-Shock. Expect the predominantly black wrist watch to feature a black ion-plated stainless steel metal band, case and buttons, with gold accents on the face and a dark fuchsia second hand – a subtle nod to the man’s most recent collection. Here’s what the man have to say about this maiden collaborative G-Shock:

“My favorite time in Tokyo is walking through the city in the middle of the night, when it is impossible to sleep because of the jet lag. The lights, smells and sounds are really magical and I wanted this watch to reflect that magic.”

In addition to Geller’s touches, you can look forward to the signature features of a G-Shock and that includes the requisite shock resistance, 200 meter water resistance, along with technologies like auto super illuminator LED light, neo-brite luminous hands, world time with a cool 31 time zones, five daily alarms, 1.100th second stopwatch and countdown timer and 12/24 hour formats. If you want, you can catch a video showcase of this collaboration HERE.

The CASIO G-Shock x Robert Geller Limited Edition G-Steel Watch will be available starting sometime in July from select Macy’s, select Jewelers, G-Shock Soho Store, as well as, G-Shock online store, priced at $420 a piece. Ouch. Quite a sticker there, don’t you think?