panoramic video camera is not new, but the CENTR Camera here stands out as one that’s capable of capturing 4K resolution and still fits in the palm of your hand. created by a team of former Apple engineers, the technology behind the CENTR Camera has already seen real world uses in the military and major sports channels and now, after three years of dedication, that technology is being packed into a splash-proof hockey puck-shaped device that fits right in the palm of your hand and ready for everyday people to experience the awesomeness of real-time panoramic videos. the device uses four 1080p cameras to capture and stitch together 360-degree video at up to 60 fps in real-time using the firm’s proprietary software. apart from 360-degree videoing, it is also fully capable of doing 20MP time-lapse panoramic photography and allows for individual camera selection for times when you don’t need to shoot in all directions. i believe, the latter is also the first in the industry which makes this a true everyday camera and not just one that’s for everyone. 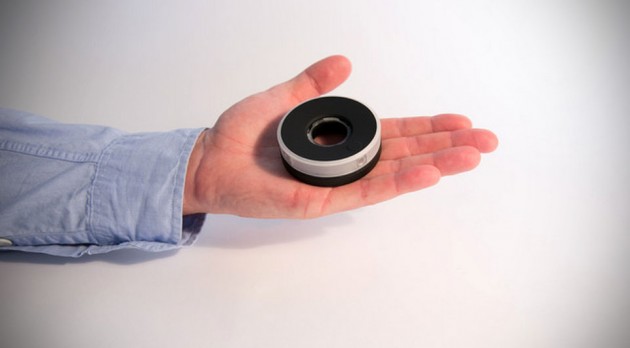 the donut form is intentional, so that you can simply stick your thumb or finger through the opening, so that no other parts of your hand will get in the way of the shooting. other highlights include an (super cool) integrated digital bubble level, tripod and GoPro mount compatible, built-in WiFi and Bluetooth LE, quick-release battery that offers up to 2 hours of runtime per charge, and 8GB of onboard storage, supplemented by microSD expansion slot. the CENTR Camera is now on Kickstarter, looking to raise $900,000 to being this revolutionary 36-degree camera to life. if you want one, all you need to do is to make a pledge of $299 or more. as with all Kickstarter campaign, it will only become a reality if the project hits its set funding goal, but then again, with the current standing of over $200,000 backed and 28 days more to go, we don’t see why it wouldn’t make the mark.