more often than not, serious cocktail drinkers will venture beyond what their local bars can offer. like building a kit car, which you car customized to your needs as the build progresses, by creating your own concoction, you are empowered to create the unique taste that tickles your taste bud and that, my friend, usually calls for a dash of bitter. the problem is, most mass-produced bitters available off-the-shelf often contains artificial colors and/or flavoring, which prompted three dudes, collectively known as Hella Bitter, to create a line of all-natural alternatives. the creations, introduced three years ago, received their deserving love from Kickstarter backers and thus Hella Bitters was officially in the business of bitters. fast forward to 2014, the folks think it is time for the world to take a dip in making their own bitters and hence, the birth of the Craft Your Own Bitters Kit.

befitting its craft status, the kit caught our attention with its cocktail book-like packaging that opens up to reveal a custom machined funnel and strainer, two infusion jars, four dropper bottles for storing the concoctions, two source blends composed of various herbs and spices, and a four-step recipe detailing how you can pull off your very own craft bitters. once you have created your the bitters that you can call your own, it is up to you how you want to use them. however, if you are clueless about how to use the bitters to make seemingly mundane recipes into awesome recipes, Hella Bitter can help too. just head on down to the New York-based outfit’s website for a list of recipes for some enlightening ideas. but for now, if you want to craft your own bitters, you can pledge your support by dropping $50 on Craft Your Own Bitters Kit’s Kickstarter campaign and be rewarded with a CYOB kit. there are other reward levels to choose from, so make sure you check them out. 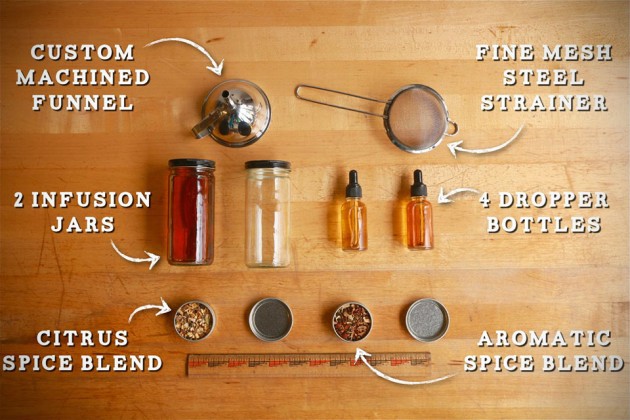