compact form factor is so passe in smartphone today as evidence by today’s growing smartphone size. and since size is not going stop us from putting a brick to our ears, why not do it in a loud fashion? like slapping your otherwise slim form iPhone with this Crazy Case Batmobile Tumbler iPhone Case. what? the Tumbler is now an iPhone case? yes. indeed – which needless to say, is one of the coolest, if not the quirkiest iPhone case we have seen to date and we think any self-respecting The Dark Knight fans would gladly forsake the slim form factor of the iPhone and eagerly bump up of the size of their handsets with this awesome case. from top down view and or in fact, any other angle when the case is lay flat and down, you won’t even suspect it was an iPhone case cos’ it look totally like a model of the Tumbler, albeit a wee flatter.

while this cool case takes on the form of a Tumbler, it is no superhero ride that will deflect bullets or leap from building to building (nor will it launched tiny missiles or spit fire), but it will however, keep your iPhone safe from daily knocks and bumps, and still offering access to all ports and buttons, or so we read. however, the Crazy Case Batmobile Tumbler iPhone Case has more The Dark Knight-worthy cool tricks up its sleeve – kicking off with a set of LED projector lamp built-into the “vehicle” jet engine nozzle which will cast a Bat signal on the wall – activated via a button on the case. there are also six LED lights (aka the driving lights), of which two will flash when there is an incoming call. finally, the left front wheel of the Tumbler iPhone Case is slidable (slides upward) to reveal the iPhone camera behind it.

the Crazy Case Batmobile Tumbler iPhone Case is being sold by Bandai with a 5,775.00 Yen price tag (about US$56), which means it is safe to assume this awesomeness is only available to the Japanese market, but we have high hopes that it will be available (eventually) from Strapya International or GeekStuff4U.com. but for now, those in Japan can secure this super cool iPhone case in a pre-order exercise happening from now up till January 07, 2014, and expect shipment to start in March 2014. check out a very Dark Knight-ish product intro video after the break. 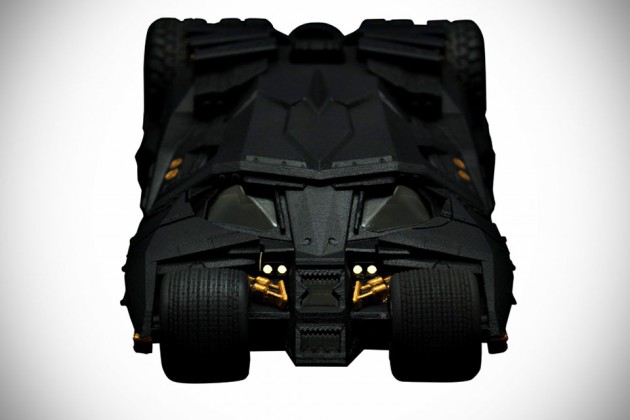