So you think a curved display laptop is crazy? Well, it is, but that’s until Razer’s bold and pretty much classified as mental multi-monitor laptop comes along. Code name Project Valarie, this ambitious multi-monitor gaming laptop promised a whole new level of immersion even when you are on the road and yes, you heard that right, this thing is a beast and it has not one, not two, but three displays built into it. Looking like a gadget straight out of sci-fi movies, Project Valarie’s three monitor automatically deploys when, presumably, the lid is flipped open. 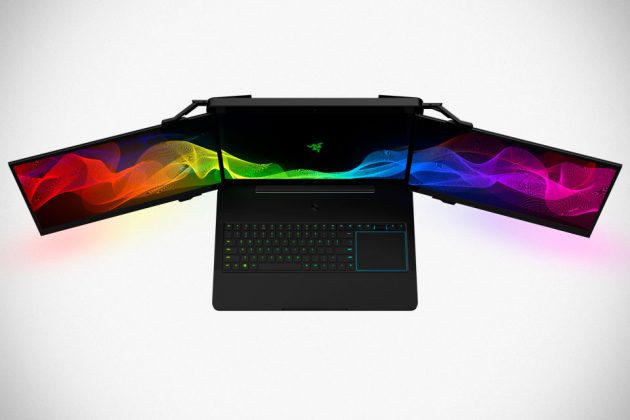 A deployment mechanism designed by Razer enables the side displays to slide out of the main screen and adjusts into place – an action that reminiscent of high-tech ‘computers’ depicted in some sci-fi movies. It’s pretty unreal, but it is of course very real now and on top of that, it is a freaking laptop. I can’t help but to be awed by the audacious concept Project Valarie proposes. Gaming enthusiasts who lament the lack immersion from a laptop can now pretty much shut the f*@k, or so it seems. So, soon, you can lost yourself in the game whenever, wherever.

In addition to gaming, Razer said Project Valarie is well capable of handling any PC task, whether or not the tasks require multi-monitor. And if you do need multi-monitor setup, this insane rig here is all up for it without the associated cable clutter. Seriously, who needs a desktop anymore? According to a Tweet response by Razer, Project Valarie can be used as a single monitor laptop too, if so desire. 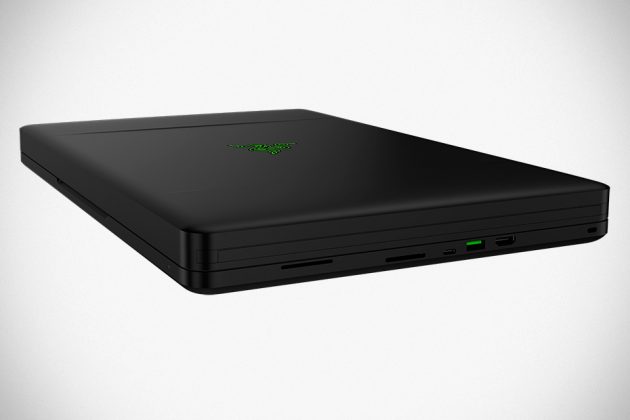 Employing the same design language used by other Razer portables, Project Valarie gets a sleek, unibody CNC aluminum chassis which, despite packing in three monitors, measures just an inch and a half (3.8 cm) thick and tips the scale at under 12 lbs (5.44 kilograms). Little is known about the hard specs, but that’s not surprising, given that it is touted as a “concept design.” However, we do know that each 17.3-inch 4K IGZO monitor is equipped with NVIDA G-SYNC technology that will provide “ the smoothest possible frame rates and expansive 180-degree NVIDIA Surround View gaming.” That’s a whopping 11,520 x 2,160 resolution there – at your disposal wherever you may be. 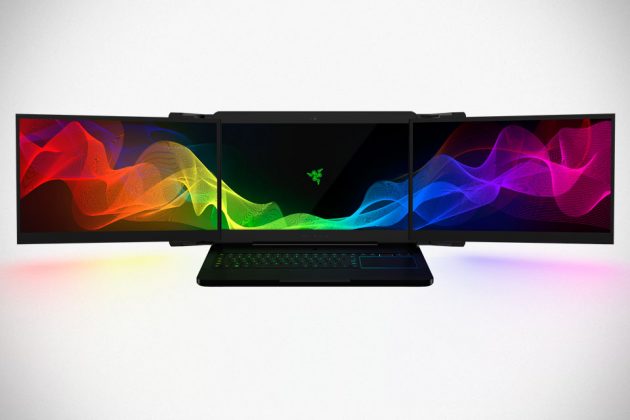 Additionally, it also boasts 100 percent Adobe RGB color accuracy, NVIDIA GeForce GTX 1080 graphics, a custom heat management to ensure the device keeps its cool in the heat of the virtual battle, an integrated keyboard with Ultra-Low-Profile mechanical switches, and last but not the least, virtually all hardware on it are Chroma-ready, so you can get yourself psyched up by an insane range of lighting effects as you rocket round the Silverstone Circuit at 200 miles an hour. Project Valerie is, as reported, a concept gaming laptop and hence, there’s no telling if or when it will be realized.