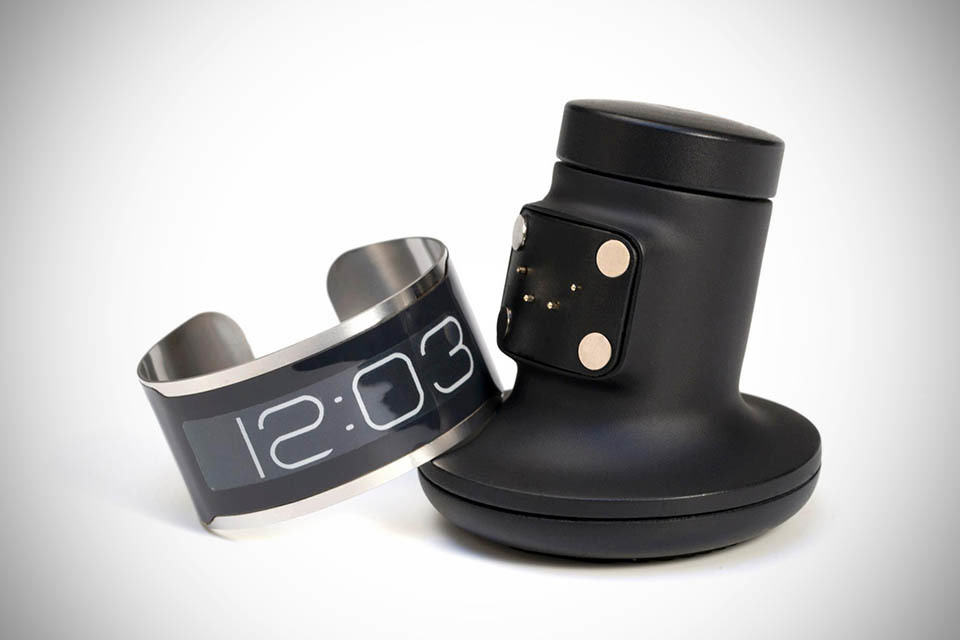 it is year 2013 and the world is nothing close to what that have been foretold by sci-fi movies. not even our basic time keeper, the wrist watch, is anything close to the ‘future’ but that’s going to change with the CST-01 E-ink Wrist Watch by Central Standard Timing. so what’s so ‘futuristic’ about the CST-01? for starter, it is a mere 0.8mm thin and there’s no differentiation between the band and watch face – the whole time piece is as one, much like a bracelet. crafted from stainless spring steel, its maker daringly etch off 0.5mm to create a pocket of sort for the necessary E-ink components including the E-ink segmented display, the Seiko-Epson microcontroller System on Chip (SoC) and the micro energy cell (MEC) that powers the wrist watch. the embedded MEC offers up to a month use in between charges and only requires just 10 minutes for it to fully charged. we are especially dope about its charging device (called a base station) where all you have to do is to settle your CST-01 over it for the juicing process to begin. it really is, a representation of the future gadget where you can own today. well, maybe not today’s today but by September this year which is still considered as present time anyway. Central Standard Timing has taken this brilliant project to Kickstarter and has since surpassed its funding goal by a remarkable 260% (and it still have 35 more days to go). the CST-01 can be yours simply by making a pledge of $129 or more. available in white or black – both of which are colors of the future. check an exceedingly simple but effective pledge video after the break.