Back in May 4th, 2018, the unofficial Star Wars Day, avid LEGO builder Grant Davis collaborated with fellow LEGO enthusiast Eli Willsea to build a huge-ass LEGO diorama of a brief scene from the 7th Star Wars movie, Star Wars: The Force Awakens where Rey was scavenging through a broken down Star Destroyer. Originally, Grant Davis had planned and started the build by himself, but it ended as a full collaboration with his good friend Willsea. 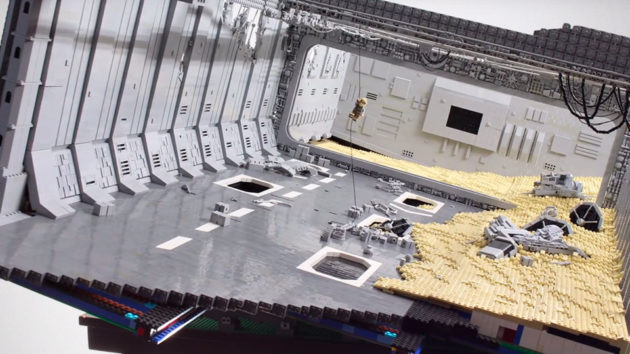 Davis did not mention how many pieces were used, but according to the man himself, it took over three weeks to build, photo and edit the video. That’s pretty damn impressive considering the scale of this masterpiece. Speaking of scale, it is not clear what is the scale, but Grant did said the diorama stretches over 7 feet (2.1 meters) long and judging from the builder’s size to the set, I’d say a small apartment would be hard pressed to find a space for it. It won’t swallow up the entire house for sure, but it will make a small room look way too small.

Man, this is truly an impressive work of art since after the custom LEGO diorama “Winter of Hoth” we saw last November. We don’t have a lot of images of this Custom LEGO Scavenging The Destroyer, but you can find the time-lapse video of it being built embedded below. Enjoy! Enjoy I surely did and I am sure you will too!