I never noticed if the characters on Death Star drink anything at all, but if they did, my best guess is, the dudes onboard the deadly space station would be drinking from the Death Star Sculpted Ceramic Mug because, Death Star. Duh. It is obvious. Clearly, no one will dare to drink from a mug in the likeness of Darth Vader’s helmet. OK. Maybe Emperor Palatine will, but…anyways, as the product name implies, this is a mug that takes on the form of the infamous, planet-obliterating Moon-size space station. While so, it is not the size of the Moon. 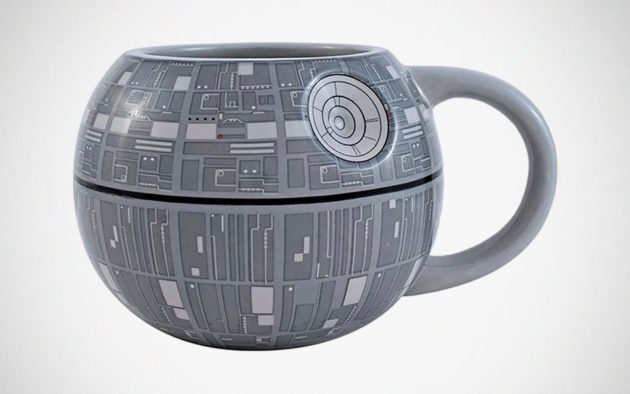 Still it is massive by the standard of a mug, coming in at 20 ounces (0.59 liters), which is more than a regular can of soda and a little too much for a morning cup of Joe. It is made from ceramic which means, it is as fragile as the deadly space station. Hand wash only and it is not exactly microwave-friendly. Makes sense. You can’t fit a Moon in a microwave, can you?

Get it from the gift shop located at the Equatorial sector, along the way to the main hanger space… nah, just kidding. They don’t have a gift shop on Death Star. Instead, you can get it here on Earth, from Entertainment Earth for 50,000 Imperial credits. Just kidding. It costs just 12.99 American dollars. Nice to know stuff from the galaxy far, far away can be bought on Earth, don’t you think? Well, I certainly think so!