The Powell family and his neighborhood in Lafayette, California must be a super fan of Star Wars as judge by the giant Millennium Falcon replica looming over their roof. The 29-foot (8.4 meters) long, 700 pounds (318 kilograms) Millennium Falcon is not of space age material, obviously, but mainly of wooden frame and PVC piping, and interestingly, wrapped in a rather surprising material: a military-surplus parachute. The result is impressive enough to warrant the appearance of Han Solo, Princess Leia and the gang, well, not the real actors, but a printed version of the entourage which was thoughtfully placed in the cockpit. It is a fun touch to an awesome build. 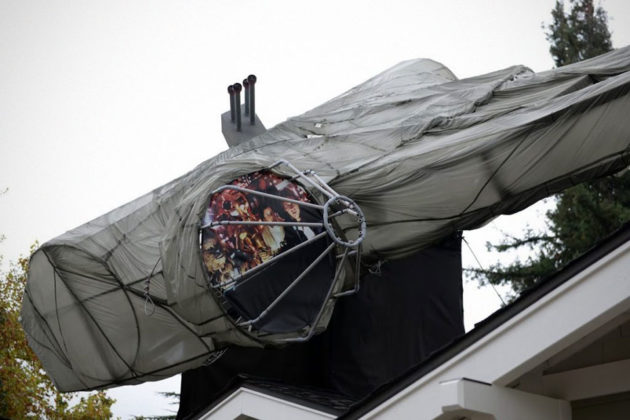 Even more impressive is when the night falls because, this Millennium Falcon actually lights up – thanks to the feet after feet of rope light. The rope light highlights the outline of the Millennium Falcon beautifully and it even has light-up rear thrusters too. The Millennium Falcon was originally built as part of the family’s Halloween decor, but the Powell have been keeping it afloat since and will continue to do so until the next Star Wars movie, The Last Jedi premieres in the theaters. After which, they will think about where it should go. 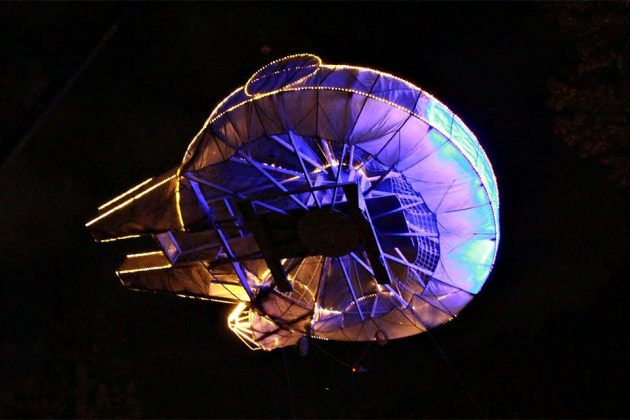 via Make via io9.