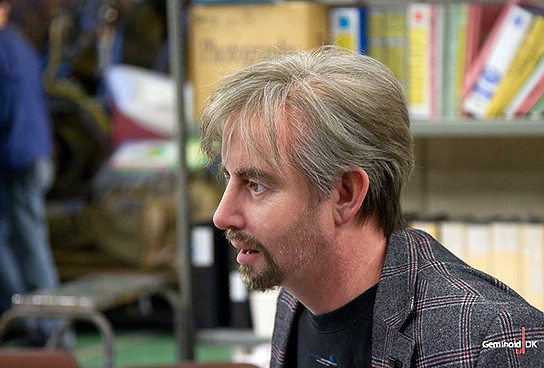 besides being the first Geminoid based on a non-Japanese person, the Geminoid DK, is also the first to sport facial hair. the robot was modeled after Associate Professor Hendrik Scharfe of Aalborg University of Denmark. great. even though we have not seen Assoc.Prof Scharfe before, now we know how he looks like! Prof. Scharfe revealed that they had been working on this latest Germinoid for a year now and the base Geminoid was built in Kokoro in Tokyo and is currently undergoing setup and testing in Japan’s Advanced Telecommunications Research Institute International (ATR).
[ad#Google Adsense-text-468×60]

like the Android-F, Geminoid DK movements and facial expressions are remotely controlled via a motion-capture system, operated by an operator. the motion-capture camera tracks the facial expressions and head movements of the operator and translate them to the Geminoid. what creeps us out is the fact that Geminoid DK looks realistically unreal, especially when it’s smiling and blinking. i guess, with the combination of technology like the kinect-controlled android, surrogates aren’t too far off, eh? catch the Geminoid in action in the videos after jump, and also a few images of the making of Geminoid DK.