Evangelion and Japanese Swords Exhibition has been going for a couple of years now. The exhibition is a collaboration between Japan’s up-and-coming contemporary swordsmiths (yes, they still exist) and Rebuild of Evangelion series. Fans of the now-cult apocalyptic anime and swords enthusiasts alike who resides or visits Japan can get to witness Evangelion-inspired swords created by these talented and skilled swordsmiths in this roving exhibition. But seeing was as far as any Evangelion fans could get, well, that’s until now. Japanese toy giant, Takara Tomy is launching a line of sword-wielding dolls (we prefer to call it action figures, actually) based on Evangelion to mark the Evangelion and Japanese sword exhibition, happening between August 15 and September 27, 2015, at the Iwate Prefectural Civic Center in Morioka, Iwate Prefecture, Japan. 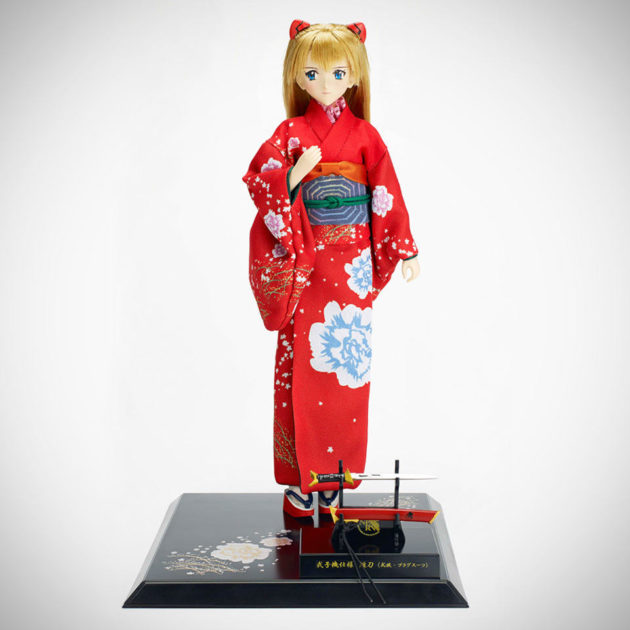 Kicking off the collection is Asuka Shikinami Langley from Rebuild of Evangelion series, with additional figures, including Rei Ayanami and Mari Makinami Illustrious, in the pipeline. Officially dubbed, Asuka Shikinami Langely with Japanese Sword Doll, the 27cm (about 10.6 inches) tall figure is garbed in kimono, along with underclothes, socks, Japanese wooden clogs, topped with Asuka-defining hair ornaments and accessorized with a sword featuring an engraved silhouette of Asuka in her plug suit. NERV’s emblem can be found on the yellow-accented red sword sheath, as well as a miniature sword display stand. The otherwise traditional female Japanese robe is accentuated by an obi (wide belt) with A.T. field pattern that adds a hint of futurism.

Evangelion Asuka Shikinami Langely with Japanese Sword Doll is available for pre-order starting now till September 28, 2015, priced at 16,200 Japanese monies (around US$135). Shipment is expected to happen sometime in late January 2016.