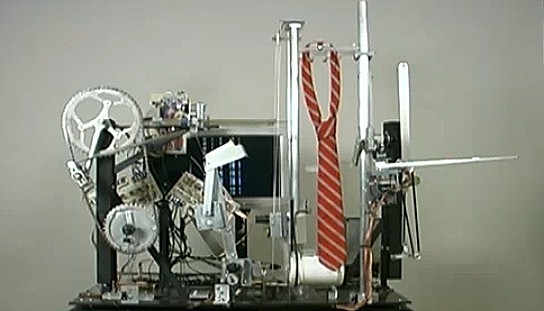 i hate tying ties as much as i hate clipping my nails. often, i wish somebody would invent something to tackle these simple yet frustrating chores. thank goodness for people like Seth Goldstein, who must have shared the same perspective as myself, designed and built a machine that solve this seemingly minute issue. the machine, aptly named ‘Why Knot?’, looks more complicated than it is to knot up a tie but it certainly works beautifully. hmmm, did i see a bicycle sprocket, chain and pedal there? very intriguing and applaudable project.
[ad#Google Adsense-text-468×60]

check out the computer monitor in the background, busily going through the program logic as the robot goes about tying up the knot. something that reminiscent of what you would see in a 80s sci-fi movie – scrolling codes. awesome. catch the ‘bot in action in the video after the jump.