When it comes to wacky in-game weapons, the image of fan-modded GTA V comes to mind. That being said, it is hard to imagine that the developers themselves will dish out wacky weapons like say, for example, a Shovel Launcher? If you haven’t already caught this fun news, Ubisoft has up the power of Far Cry 5 in-game melee weapon of choice: the shovel, turning it into an even deadlier (and strangely more satisfying) Shovel Launcher. 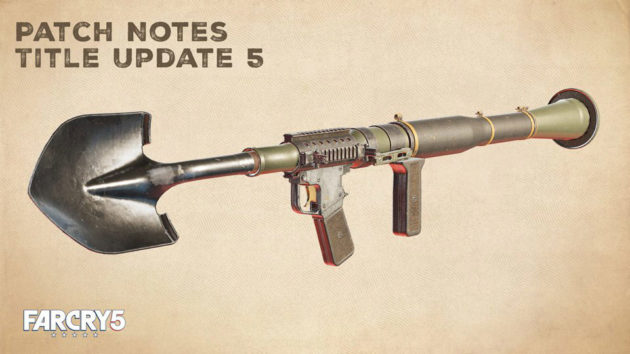 Shovel Launcher is exactly what it sounds like: it is essentially a Rocket Propelled Grenade (RPG) launcher, but in place of grenade as the projectile, it has a shovel. So, yeah. You can now go beyond lopping the shovel like a javelin. How sweet. Even more sweeter is, you get to have three shots before it needs reloading. In addition, getting the shovel head “ammo” is as easy as picking up the shovel head fired from the launcher.

OK. Maybe it is not exactly ideal if you are in a heated firefight, but I guess it isn’t as bad as far as hunting for ammo is concerned. Plus, you get the bonus of picking up whatever that’s left by the person you have just buried. The Shovel Launcher is no doubt the wackiest and funnest weapons to have arrive in Far Cry franchise, but while fun, it is not without its caveat: it won’t blow up things like the RPG projectile.

In other words, it won’t cause a mini carnage when it lands on the target. On the flip side, though, it is stealthier. In a Tweet earlier today (or yesterday, depending on where you are), Ubisoft beckons gamers come forth to join the “White Collar Job” live event to earn this wacky meme weapon.

Turn in those white collars to Jess and claim this week’s exclusive rewards- including the brand new shovel launcher! Track your progress here: https://t.co/gM1x46LoNY pic.twitter.com/INoPbDyBsX