With the proliferation of wearable tech, in particular, smartwatches, it is hard for conventional watch makers not to follow suit – unless they are prepared to face the risk of being fossilized, so to speak. Speaking of fossil, fashionable watch maker Fossil won’t be a fossil after all; the Texas-based clothing and accessories maker has announced its first smartwatch, an Android Wear device called Q Founder, along with a few other wearables under its Fossil Q line.

We thought Fossil came in at the ripe time. When smartwatches just started, having a true round display is unthinkable, but as technology evolves, proper circular display becomes a reality. And so yes, Q Founder is a circular touchscreen smartwatch that enjoys all the features of Google’s Android Wear. Fossil described it as an elegant package, which we do not disagree. It actually looks pretty sleek. Detail is scarce at this point, but we do know that it has a customizable watch face and will be compatible with both Android phones and iPhones. Q Founder is the result of a collaboration with Intel and Google and has a retail price of $275 when it becomes available this holiday season. 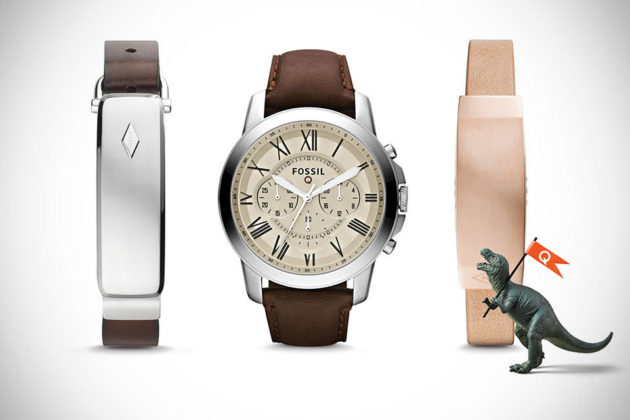 If having a digitized watch face isn’t your cuppa, Q Grant may be right up your alley. Beneath the regular watch look, Q Grant is in constant communication with your smartphone and only alerting you based on your preference via vibration and discreet LED indicators. Q Grant is also a fitness tracker too, logging your activity, which, presumably, viewable on your smartphone. Q Grant is expected to be available on October 25, priced at $175-$195.