i had a vision that we would one day own devices that though small, have a big display whenever we need it. something like a touch-enabled holographic projection that we can just call up when we need a bigger display. while this Star Wars-like projection technology is still far from reality, a group of students at the Carnegie Mellon University have been cracking their heads to explore how to make a watch bigger without actually making it bigger, and the result is what the team at the University’s Future Interfaces Group called Skin Buttons. implemented on a fairly regular size prototype smartwatch, Skin Buttons are interactive virtual buttons projected on to the wearer’s arm on either side of the watch, thereby using the user’s arm as an extension of the watch. 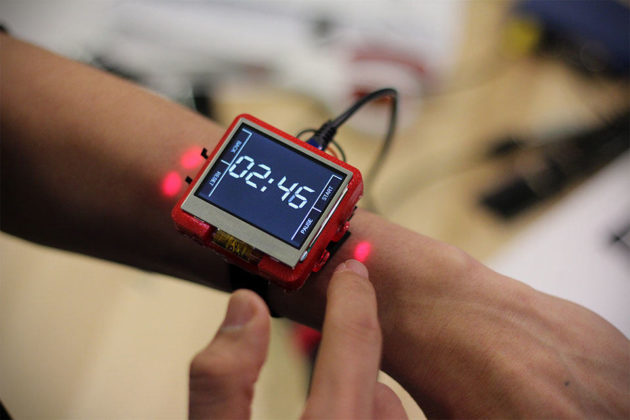 for now, the projected buttons are of fixed icon, supplemented by small labels on the watch’s display to indicate what the buttons are for. infrared proximity sensors are used to detect if the user touches an icon or not. by putting the buttons outside of the watch, so to speak, user can execute certain commands without actually touch the display and therefore not obscuring the screen. it is no doubt a brilliant idea and one that could pave way for other developments that could improve user experience of a small device like smartwatches. we are totally looking forward to it… and the fictional interactive projection holographic display, which still non-existence today. can someone make invent that already? anywho, keep going for a video to see it in action.