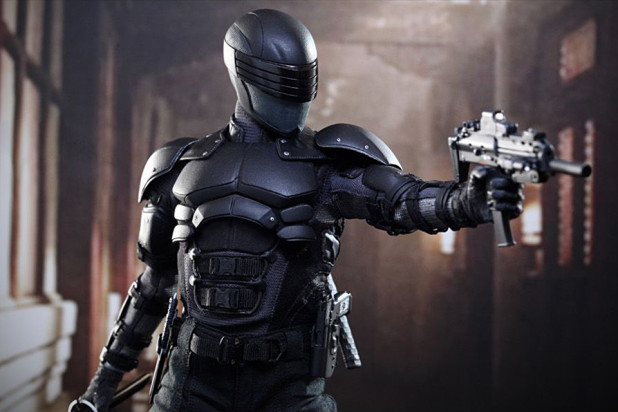 no. what you see here is not a screenshot from the second big screen G.I. Joe flick, G.I. Joe Retaliation but a realistically sculpted 1/6th collectible figure of the character Snake Eyes. the G.I. Joe Retaliation Snake Eyes Sixth Scale Figure is the first collaboration between Hot Toys and Hasbro and it features movie-accurate details crafted based on the image of Snake Eyes in his black “military ninja’ outfit in the movie. standing approximately 30 centimeters (12 inches) tall, the Snake Eyes figure features Hot Toys’ TrueType body with over 30 points of articulation, interchangeable palms and upper body. the collectible comes with five pairs of hands – including a pair of fists, palms for holding gun, palms for holding swords and a pair of relaxed palms – a black ‘military ninja’ bodysuit with armor on upper body and arms, one black helmet, a pair of black boots, Japanese-style metal swords with sheath, a pair of daggers with sheaths, submachine gun, one pistol complete with holster and a figure stand with Snake Eyes nameplate, as well as the movie logo. you can pre-order yours for $194.99 each with estimated shipment to be in May 2013. in the mean time, treat yourself to some imageries of the Snake Eyes Sixth Scale Figure after the break. oh, in case you have yet to catch the trailer, you can view it in the embedded video further down the post.

NOW READ  Hot Toys Avengers: Endgame Thor Is Fat, But Not As Glorious As Marvel Legends’