Still holding on to some good’ol medias like cassette tapes, CDs (yes, they are old too) and vinyl records? If you don’t already have a player for each of those type of medias and harbor the wish of feeling the warm offer by those older medias again, then Grace Digital Tunewriter III 7-in-1 Stereo Entertainment Center is the obvious gadget for you. Why? Seriously, you are not going plonk down thousands for so-called audiophile grade players for those and besides, having three devices doing just one thing each is kind of counterintuitive and goes against the whole declutter life mission for some. So, yes. This 7-in-1 Stereo Entertainment Center is a one-piece audio equipment that playbacks cassette tapes, CDs, and vinyls, and on top of that, it has a built-in AM/FM tuner too, just in case, you want take retro entertainment to the whole nine. 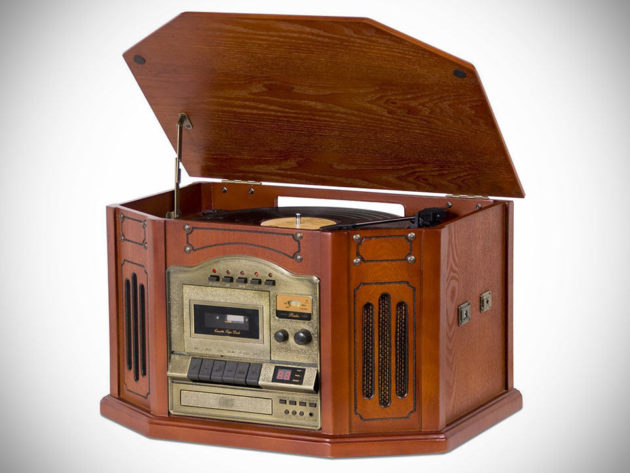 Clad in Paprika wood-style cabinet, the system is decidedly retro, befitting the medias it is designed to spin and boasts two full-range speakers and integrated class-D digital amplifier for intense and clear sonic delivery and a headphone jack for private listening. A rustic front panel is where you will find the CD tray, cassette deck and the radio, along with the controls, while the top flips up to reveal a turntable that plays 33, 45 and 78 RPM records. Beyond playing back the medias you love, Tunewriter can also records those analog albums directly to your PC or Mac using the built-in USB port and the included Audacity Sound Editor software. Obviously, Tunewriter isn’t the first in the market to be able to do that, but it is probably the first to look so brilliant.

Also, even though the Tunewriter III isn’t the newest of Tunewriter series, we thought the rustic panel and Victoria styling beats the newer ones, which looks a little too modern despite sharing the same Paprika styling, hands down. The best part about the Grace Digital Victoria Tunewriter III 7-in-1 Stereo Entertainment Center? It cost just $166.33 to own.