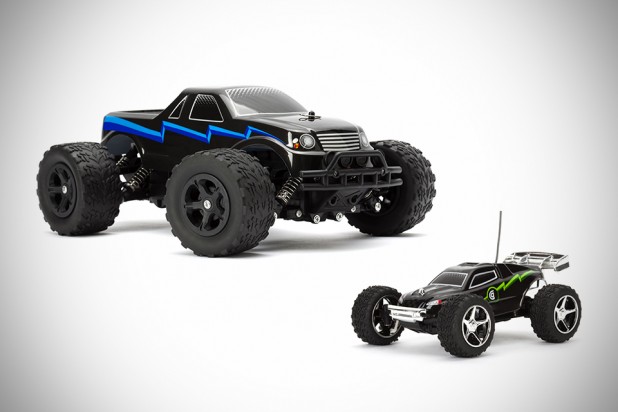 for most part, the invasion of iPhone almost seems unstoppable. it take cares of your appointment, your entertainment needs (movies, music and all), and it also sees to your reading needs. so why stop there? how about letting it be the control of your remote control toy trucks? joining Griffin’s HELO TC and HELO TC Assault is the duo Griffin MOTO TC Monster and MOTO TC Racer, catering to those who prefer to keep their feet on the ground. kicking off the pair is the MOTO TC Monster truck, a Bluetooth-controlled monster truck, controllable by iPhone, iPod touch, as well as iPad, with a free app. the MOTO TC Monster truck offers four ways to control: touch to steer the virtual steering wheel and control the throttle, using motion by tilting the device to steer, sliding your finger across the touchscreen to command the vehicle’s direction, and just let the monster go through a series of preset routes or record your own custom route. features of the MOTO TC Monster truck includes high-clearance chassis, four-wheel independent suspension, off-road style knobby tires, and built-in 600mAh rechargeable NiMH battery pack goof for 10-18 minutes destruction per charge. the Griffin MOTO TC Monster is available now for $59.99. the second in line is the smaller Griffin MOTO TC Racer, also controllable with iDevices via the soon-to-be-available MOTO TC Racer app. however, instead of Bluetooth, the iDevice uses a radio frequency adapter to send control commands to the MOTO TC Racer’s built-in radio frequency module and offering two ways of control: onscreen virtual joystick and throttle or tilting the iOS device to steer. dropping in this mid-November for just $29.99 a pop. larger views available after the break.