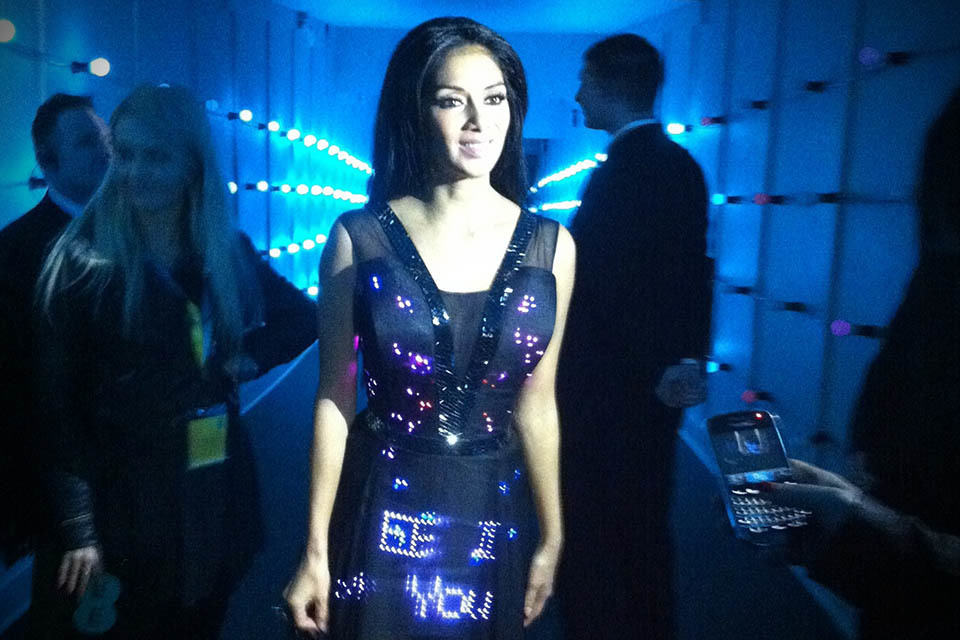 how do know you are hardcore Twitter addict? for ladies, one the signs is, finding yourself desperately scouring the net in an attempt to buy this Haute Couture Twitter Dress by CuteCircuit as seen here worn by this beautiful ex-Pussycat doll member Nicole Scherzinger. the dress, an evening gown, is made of french chiffon changeant and decorated by thousands of hematite Swarovski Elements and it is certainly made to dazzle but that however, is not the star of this dress (though Nicole might have drawn most of the attention to her). the highlight is the technology and the LEDs that are sewed onto it that makes it even more attention-grabbing. these LEDs combine to result in sort of a display on the dress, displaying animations that seems to be crawling around Nicole’s body and the press, for their part, could share their words by tweeting directly to the dress. strange as it may sound but it sure makes the mark as the ultimate dress for twitter addict for the fairer sex. the dress and Nicole made the appearance at the launch of a new 4G network from Everything Everywhere in the UK. pretty neat stuff. unfortunately, it seems like this is more like a showpiece and hence, you probably can’t get anywhere on earth and so smartphone and tablet are still your best friends for Twitter for now. scroll down for a video of Nicole showing off the dress at the said event.