Building a tank by a non-military contractor is nothing new and is building a scale, drivable tank, but a scale drivable tank by a person who’s barely out of his teens? Well, that is something new. What you see here is a 1:2.5 scale ‘replica’ of the WWII-era Pershing Tank built from the ground up by an 18 year-old YouTuber who called himself MacroMachines. We can’t figure out what drives the tank; it is a gas engine for sure, though, however, we leave it to you to find out from a sped up process of the build, along with a bunch of footage taken from the lengthy 14 months build. 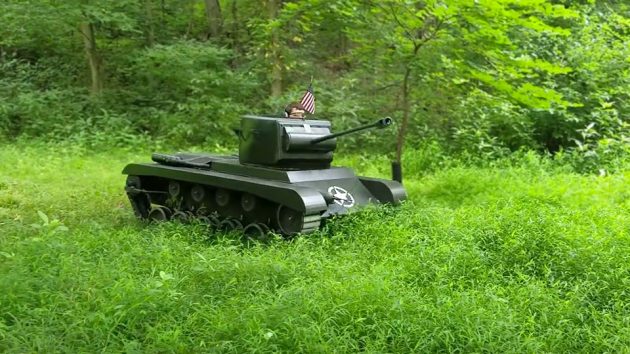 Anyways, from the a couple of the videos posted, it is obvious that this predominantly wood built tank is no push over. It might be 40 percent the size of the real-deal, it does leave quite an imprint on the grass it rolled over. Furthermore, it has most of the details, including the insignias, tank essential tow cable, a non-functioning fixed machine gun, a functioning turret with a main armament that shoots, and even a gun stay around the back. Perhaps, most impressively is, it is actually drivable and more than capable of traversing forested floor. Well, if this ain’t an awesome build, we don’t know what is. Skip ahead for the video of the official unveiling, as we as the final build process video. You can also find the rest of the process video on MacroMachines’ YouTube channel. Enjoy.

NOW READ  Roads? The LiteTrax Muddtrax MTX-C Needs No Roads. Not Even Water Can Stand It Its Way