Honor, a Huawei smartphone brand, has teamed up with Marvel to knock $100 off its flagship device, Honor 8, for this year’s Black Friday. The discount, which applies to both the 32 and 64GB models, will take effect from November 25 through to November 28 when you acquire the device from Best Buy, Amazon, Newegg and B&H Photo Video. In addition to the discount, you will also bag a free, limited edition Doctor Strange Gift Box which comes with a custom phone case, plus two Doctor Strange comic books packed inside a, well, Doctor Strange-themed box, what else? The discount should be the main draw since not everyone out there is a fan of Strange. 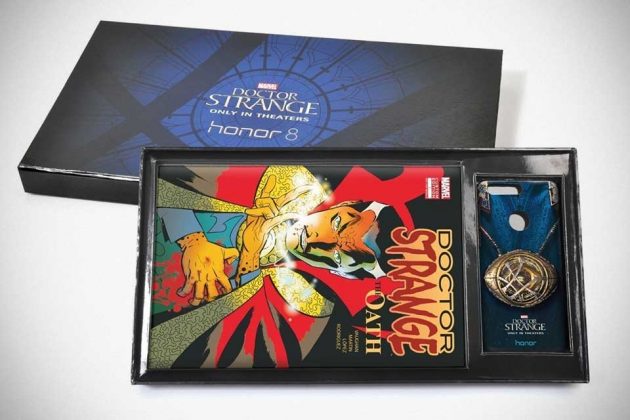 For the uninitiated, Honor 8 is powered by a 2.3GHz octa-core chip packed inside a beautiful double-sided glass design over a 15-layer finish designed that affords a rather mesmerizing light reflection. Other features touted include a 5.2-inch FHD multi-touch display that packs a cool 423ppi and more colors then human eyes can actually decipher, a 12MP dual camera setup, a 8MP front-facing camera with panoramic selfie support, LED flash, 4GB RAM, a choice of 32 or 64GB onboard storage – expandable up to 128GB via microSD card, a 3,000 mAh li-po battery that offers 360 hours of standby time and 15 hours of 3G talk time, 3D fingerprint with smart key, smart control 4.0, plus the garden variety of connectivity and sensors that makes today’s smartphones tick.

Tip: for some reason, Newegg and Amazon are selling it an additional 10 bucks less, which means, the Honor 8 is effectively $110 cheaper during this Black Friday. Don’t say we did not tell you.