There’s already a Goat Simulator that lets you play the role of a party-destroying ruminant animal and so, it isn’t farfetched to imagine there’s a chainsaw simulator. Husqvarna, a brand of Swedish Husqvarna Group that makes forest, park and garden equipment, has announced an innovative virtual reality game called Husqvarna Limberjack. Limberjack, in case you don’t already know, is a person who remove the branches from a fallen tree and limbing is the process of removing those branches. So, it is part of a logging process – something which does not go down well with treehuggers. But in the case of this limbing game, it is all done virtually and no trees will be harmed in the process. And so, yes, it is a chainsaw simulation game and yep, it is a thing now. 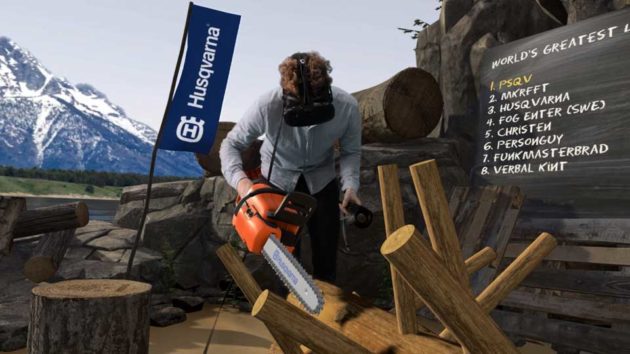 Available via Valve’s Steam as a free download, Husqvarna Limberjack VR Chainsaw Game puts your virtual limbering skill to test. In the game, which is optimized for HTC Vive, you are transported to a picturesque mountainside, next to tranquil lake and handed a Husqvarna 359 chainsaw (of course!) which you will utilise to remove 24 branches from a 2.7 meter (8.86 feet) long log. The game is really that simple, however, the real challenge here is doing it as quickly and accurately as possible. Do it fast and with precision, and you may land yourself on the top scorers list which may earn you the opportunity to compete in the “world championship final” in Sweden.

Folks, it looks like virtual limbering could be a real sport now and if you are up for it, you give it a go by downloading the game free on Steam or, if you choose to, from the official Limberjack website. Take a look at the game trailer after the break.