Depending on how you look at it, the world of conceal and carry may soon become a more dangerous one, or it could be a more convenient one. How so? Well, just take a look at this particular conceal and carry pistol. And yes. It is a pistol. When in folded mode, it is totally inconspicuous, looking like a regular smartphone but flipping off the safety, it opens into a double barrel .380 caliber pistol, lock and ready to deter any aggressor. Having a pistol that disguises itself as a smartphone hardly need any concealing and as its creator, Ideal Conceal, puts it, the Double Barrel .380 Caliber Smartphone Pistol “is virtually undetectable because it hides in plain sight.” Indeed, it does but only as awesome if it is at the hands of responsible gun owners. 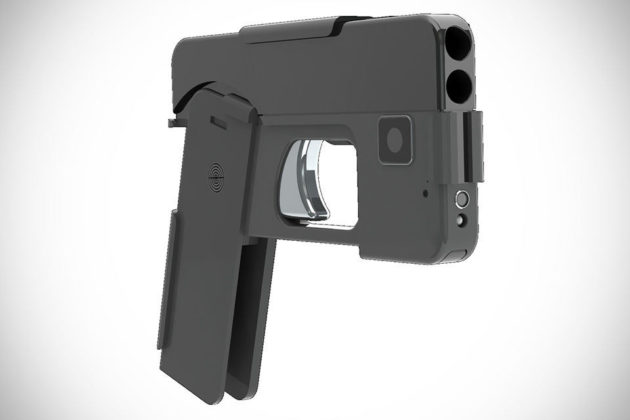 The handgun was designed with today’s environment in mind where conceal pistol “has become a necessity.” Though that’s only if your country of residence and your State are agreeable with the notion of concealment, else it could very well be a crime to be carrying this thing around. We see one obvious boon though and that’s in the case where conceal and carry is allowed, it will make carrying one a little less threatening to others since it looks pretty much like a smartphone. Little is known about this pistol except for it has a lightweight one-piece frame that touts “simple design and trouble-free operation,” a hammerless construction for maximum safety, high velocity, increased accuracy, and it comes outfitted with laser and flashlight.

According to Truth or Fiction, the gun is no chicane; it is a real product. Truth or Fiction added that the pistol is in fact patent-pending and “it will be marketed to legal firearms enthusiasts at NRA shows.” The Ideal Conceal Double Barrel .380 Caliber Smartphone Pistol is set to hit the market sometime in mid-2016, priced at $395 a pop.