Swedish furniture maker Ikea made flat-pack a thing and in the process, made Swedish meatballs great again, but as any Ikea users will tell you, while the meatballs are sweet, the struggle of putting together a flatpack furniture is very real. Understanding this, the Swedish furniture titan is not going to just stand by and let it pass; instead, the company poured into research and study, and eventually in 2014, developed a new joint system that allows a furniture to be put together easily and perhaps more importantly, without tools – not even the customary hex tool.

The joint, known as wedge dowel, leverages on ribbed curved block that slides and locks into an opposite slot, thus allowing the parts to snap together with nothing more than a slap. So, put away your flathead screwdriver and rubber-head hammer, because wedge dowel-equipped furniture such as the Lisabo table does not need it. However, if you so desire, small metal plates can be installed for aded extra security, but a wedge dowel system furniture does not really need it. 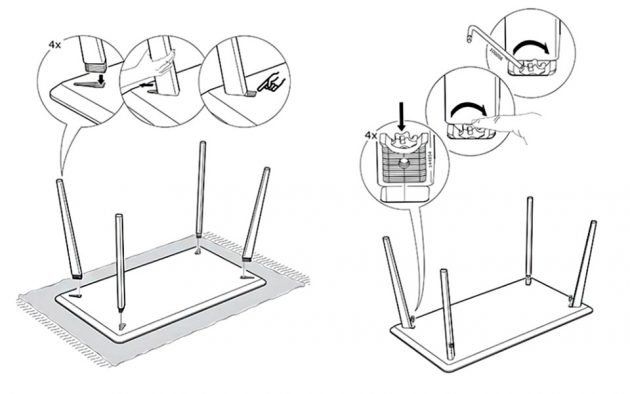 If you not secure it further, you will enjoy the benefit of knocking it down and moving it somewhere else without fuss, and because that, you will probably more incline to move your furniture then dumping in your old apartment. The wedge dowel system not only benefits end users, but it will also lead to saving on money and resources on the manufacturers’ end too. Though Ikea proposed the convenience of assembly and also the ability to easily take it apart when it needs to be moved, it is not clear how this system will stand up to repeated assembly and disassembly, but it is a leap as far as self-assembly is concerned nonetheless.

You can learn more about the wedge dowel system in the embedded video below.