By now, videos of an Indonesian man who created a working robotic arm have gone viral. Now, a story of a man and a robotic arm created out of scraps is not farfetched at all but the thing with Tawan’s creation is, the supposed robotic arm is, wait for this… mind-controlled. Meaning, it has a EEG-like headband that will be make the arm do his bidding if he focus hard enough. We would love to believe that EEG could be cobbled up in your backyard without any computer programming knowledge which obviously this Tawan is not equipped with. Then again, it appears that no one knows the truth behind this astonishing accomplishment which even had BBC chasing the news. 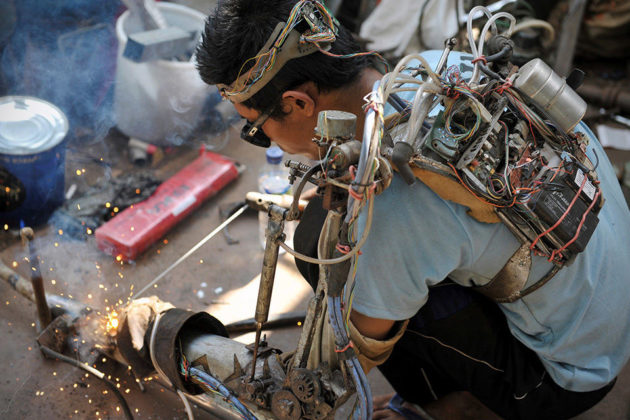 Anyways, the story goes that Tawan (real name: Wayan Sumardana), a welder by profession, suffered a minor stroke that left him with a paralyze left arm. The unfortunate illness sent his family into a financial crisis, which he decided to do something about it by creating a robotic arm so you could continue to work. Being in a backwater area, his real life Iron Man arm consisted of nothing but scraps and computer hardware he could round up.

Naturally, when you have such a beyond awe-inspiring news, skeptics are ready to pounce. However, while we are ‘partial’ skeptics, we certainly hope what this man did is indeed real. That said, we will leave you to be the judge of things. Keep on going for the said BBC video and perhaps, let us know what you think about this real-life Iron Man in the comments below.