although space travel is about to become a reality, it is still way beyond the reach of regular folks and besides, that space travel which we talked about, such as those offered by Richard Branson’s Virgin Galactic and Elon Musk’s SpaceX, will only get it to as far as 6.2 miles above the Kármán line, a widely accepted boundary between the atmosphere and space, which is a little short of our imagination that stretches to Mars or even Saturn. granted planet hopping will probably not happen in our lifetime due to the insane traveling time, but we can always imagine ourselves doing so and that is the whole idea behind The Intergalactic Travel Bureau Tour.

The Intergalactic Travel Bureau Tour has been around for a few years now, but it is not an actual tour per say, though the entourage does have professional astronomers, working alongside professional actors and have been supported by NASA, the American Physical Society and the Royal Observatory, Greenwich. even scientists from Princeton, UC Berkeley and the American Museum of Natural History have are part of the Bureau. basically, the Bureau will invite everyday people to plan the vacation of a lifetime to another planet and in the process opens ‘the intergalactic travelers’ to possibility of space travel and basically, set let their imagination run wild. in the words of the folks themselves, the Intergalactic Travel Bureau is “a live, interactive, science-theater experience that explores the incredible possibilities of space tourism.” 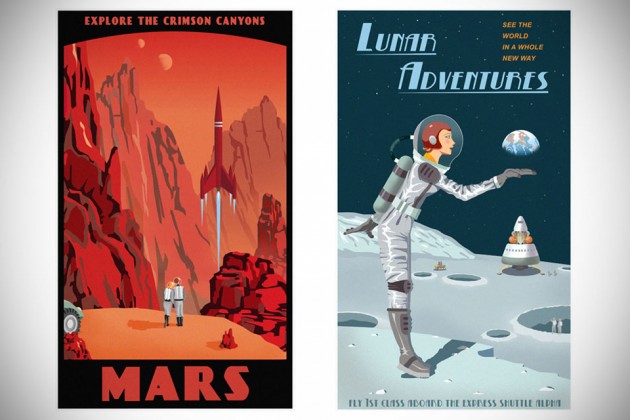 anyway, the story is, the team needs financial backing to continue doing what they are doing, bringing the show across America and United Kingdom, and in exchange for your monetary support, you can expect rewards ranging from having a say to where they will go next to delightful retro-futuristic postcards and posters to a DIY Travel Bureau kit to start your very own travel bureau. though the endeavor is admirable and no doubt has our attention, it was the postcards and posters designed by Steve Thomas that caught attention. the designs really take a stab at the core elements that first tickles our space fantasy, well, at least for us, that is the case. you can learn more about the reward levels over at the Intergalactic Travel Bureau Tour’s Kickstarter page or learn more in-depth about the Bureau at their official website.