Mechanical bull is fun. It challenges one’s strength and sense of balance on an unpredictable mechanical animal without actually abusing the animal and since it isn’t a real bull, you won’t risk being trample to death. Though it could be dangerous if one’s not careful enough and being a person of caution, you probably want to stay away from a raging mechanical bull. Well, not if you are taming the beast on water because that’s what above ground pool specialist Intex’s Inflat-A-Bull Inflatable Pool Toy lets you do. Unlike the mechanical bull, this one isn’t mechanical. It is just an inflatable float in the shape of a very unhappy bull rigged to an oversized circular float. 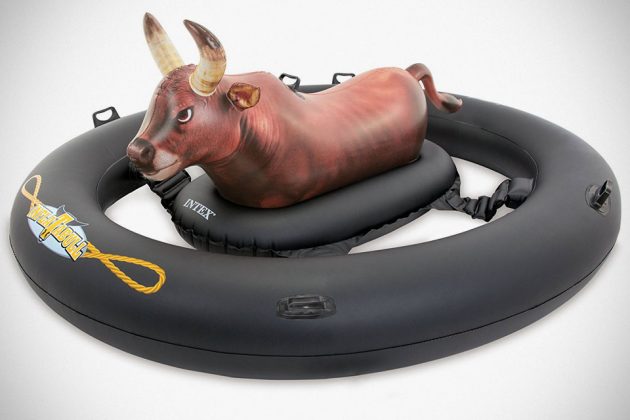 A handle is conveniently located on the back of the ‘bull’ for you to hold on to your dear life and while your friends try all their might to topple you by yanking more handles attached on the oversized circular float. My guess is, it won’t be as thrilling as the land-based mechanical counterpart, but it should be good for some in-the-pool fun, well, provided you have a pool big enough to do that cos’ you don’t want to come crashing down on the tiled concrete edges. Also, don’t do it on the open water because it will attract the undivided attention of sharks.

Anyways, how long you can last depends not only on your resolve in holding on, but also your friends’ resolve to knock you out of the hot seat. My guess is, a few of the Rock sized friends would have you done in seconds. Keep going for a not-so-brilliantly acted out but still looks like fun product video and if you are ready, you can pick up one off Amazon for $79.95.

NOW READ  What Gear Do You Need To Have To Truly Enjoy Watersports Experience?