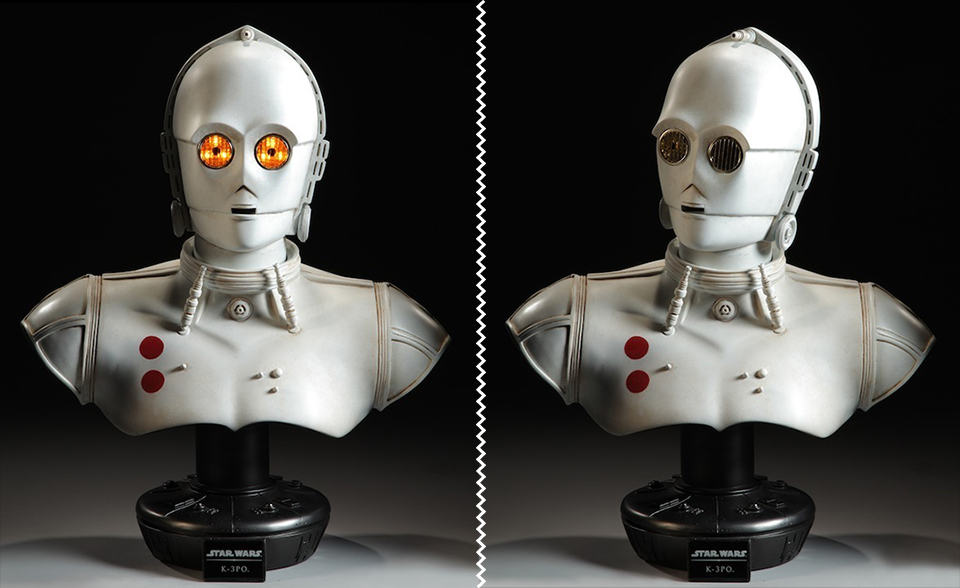 question: how to you prove that you are a diehard Star Wars fan? answer: collect every single Star Wars collectibles available on the planet including one-off prototypes, like this K-3PO Life-Size Bust Prototype. put up for auction by Sideshow Collectibles for a charitable cause, the K-3PO is a highly detailed white Protocol Droid that was originally designed to be part of the Sideshow Collectibles Star Wars Life-Size bust collection. unfortunately, this particular example did not made it through the stringent approval process and thus, remains as an unproduced prototype. the bust is hand painted and finished, resulting in a unique color variations which make this collectible all the more attractive. other features include light up eyes and rotatable head. for the uninitiated, the following is a little history on this cool droid:

[quote]”the white Protocol Droid placed in charge of the Echo Base droid pool on the planet Hoth. Originally owned by star fighter pilot Arhul Narra, the droid assimilated tactical knowledge and became renowned as a tactical expert recognized by Alliance High Command. He was stationed at Alliance Headquarters on Yavin 4, Thila and finally at Echo Station, where he was destroyed in the Battle of Hoth.”[/quote]

as part of Sideshow Collectibles ‘Collect for Life’ auctions, where all proceeds from these auctions will go to local cancer causes and national children’s charities, the K-3PO Life-Sized Bust Prototype is now live in auction on eBay. i guess we don’t need to tell you how an auction works but as it stands, it has already hit more than $1,600 and with roughly five more days to go, you will never know what’s the final price tag would be. check out the K-3PO Life-Sized Bust Prototype auction listing here.