Smartphones have gone beyond helping you organize your daily live. Given the right accessories, it can do wonder and most importantly, it does so without adding to your home inventory. Here’s another one, a contact-less temperature sensor called Kalt Sensor that plugs into your device’s 3.5mm headphone and works with a companion app to provide you will temperature reading of whatever you desire in real-time. Made by Cleveland-based Robogaia Industries, the Kalt Sensor non-contact thermometer takes advantage of the infrared energy emitted by everyday objects and translates them into temperatures in Fahrenheit, Celsius, or Kelvin. 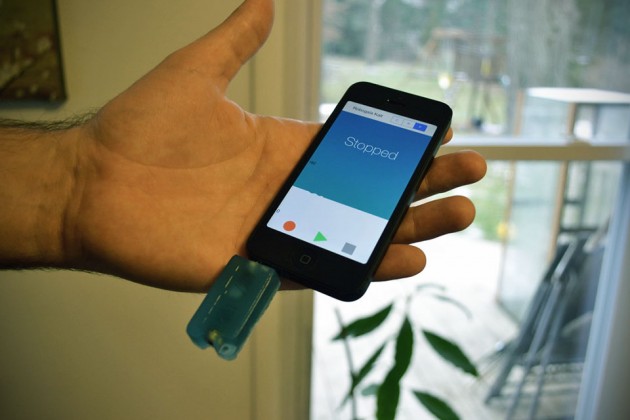 As with most smartphone hardware and app combo, using it is as simple as firing up the app, direct the Kalt at the object of interest and voila, temperature in the unit of measure of your choice right on your phone. The app not provides a number to you, but it also display a graph that tracks the temperature changes over a period of time. The device is made of translucent plastic, presented in rectangular form and is super tiny, making it a pocket handy thing which you can bring it anywhere as long as you have pockets. The prototype has been made and the only thing that’s standing between a real market-ready product and you is money, which Robogaia hope to raise through an ongoing crowdfunding campaign. Early birds will be able to secure one for just 41 bucks with delivery promised to be in March. As always, that will only materialized if the campaign reaches its modest goal of $9,999. Keep going for a campaign pitch video.