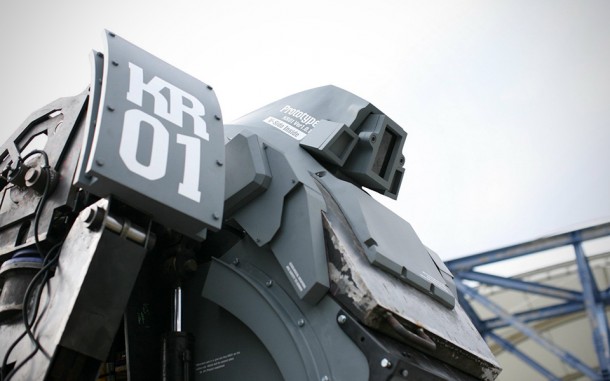 not content with just virtual mech machines in a game of MechWarrior? i knew you wouldn’t cos’ we aren’t too. since the beginning of time, many dudes who grew up watching Japanese animations such as Robotech or played MechWarrior have dreamt of piloting robots or Mechs (it just a more high-tech way of saying pilot-able robot), as they are more commonly known as – a dream which may seems a little far fetched, until now or so it seem. though we have to qualify that we detect a whiff of fish here but the idea by Japanese firm, Suidobashi Heavy Industry to create a real life working mech has our heart racing with excitement and that, my friends, is enough for us to overlook the whiff of suspicion for now. for a hefty price tag of $1,353,500, this supposed mech named KURATAS could be yours, with option for buyers to include add-ons such as carbon shield and non-lethal weapons for around $50k to $80k a pop.

however, do not expect yourself to be stomping away in your KURATAS like MechWarriors do as this mech rolls on wheels instead of a pair of periodically hissing legs and it relies on a diesel engine to propel its 4.5 tons mass at a leisurely pace of just 10 km/h (6.2 mph). it does, however, has the ability to vary its height (from low to high and vice versa), plus a few other tricks such as remote control with your smartphone via 3G network, a computing targeting system and functional but non-lethal (though, painful) weapon system that comprises of ‘LOHAS launcher’ that launches water bottles and a pair of gatling guns that is capable of unleashing 6,000 BB bullets a minute. speaking of which, this is where the odd (or fishy) part of things start – the gatling guns is triggered by smile (dubbed as SmileShots) where you can let loose those BBs at your enemies with just a smile (???). nonetheless, as a fan of mech, i will keep believing but can i not include the smile-activated feature? you see, i like to smile (a lot) and i am not fond of an angry, BB-bruised mob.

hit the jump for two videos: a product intro video and a ‘How to ride KURATAS’ video. the latter sounds suspiciously like an airline safety video at some point. i am saying…

Suidobashi via Geek via Kotaku