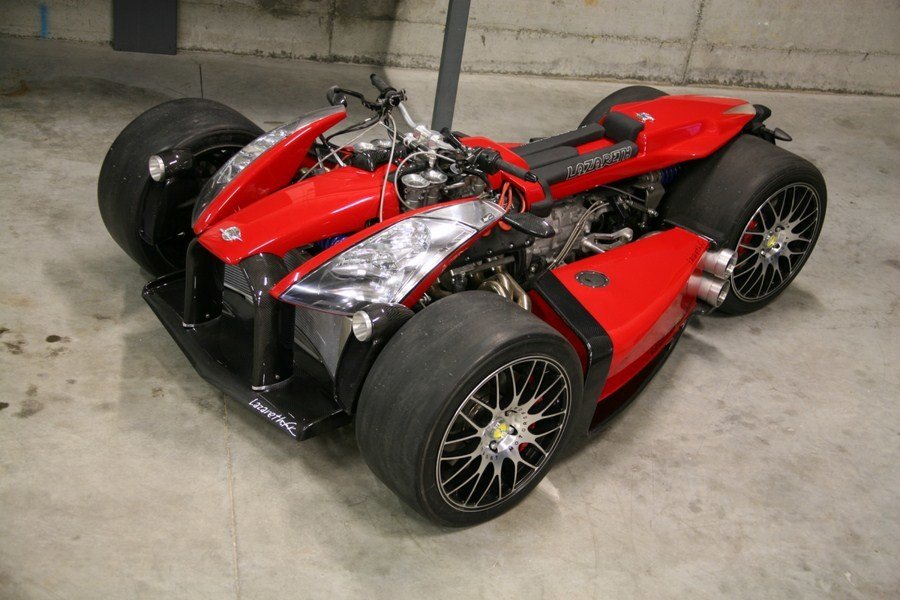 we know what is a quad bike but one that is powered by a supercar engine is not something you get to see everyday, much less owning one. but that was until now. French-firm Lazareth has conceived just such an open four-wheeler that only twisted engineering mind could have done it and it is called Lazareth Wazuma V8 Ferrari Quad Bike. this crazy quad bike is powered by a 3.0-liter Ferrari V8 that develops a healthy 250 horsepower and is equipped with a host of features that you would expected of a supercar like a six-speed sequential gearbox sourced from BMW M3, Brembo calipers coupled with huge brake disc, made-to-measure horizontal shock absorbers, and a modifiable engine management system. wrapping up the package is an alluring low-profile body that looks nothing like a quad bike to start with, and four rolling stocks that are actually modified MOMO (+Power) wheels shod in 285-30ZR18 (front) and 315-30ZR18 (rear) rubbers. of course, 250 horses under the hood may not sounds like a supercar-quality output but then again, for something that weighs just 650 kg, 250 might not be a wee figure at all. all said, if being strapped within a safety cell of a high powered auto sounds less then exhilarating to you, then perhaps the Lazareth Wazuma V8 Ferrari Quad Bike might just be the ride for you – that’s if you have €200,000 (about US$260,920) to spare. head on past the jump for a few more images and a Wazuma V8 F videoclip.

Lazareth via JamesList via DVICE