Like iPhone, LEGO is pretty much capable of many things and apparently, it now includes blowing snow. Yup. I didn’t think that is possible either, but truth be told, it can, albeit a little slower than one may have hoped. A YouTube channel that deals in all thing LEGO, specifically Technic sets, known as The Brick Wall, has created an impressive Snowblower mod. The Brick Wall did not cobbled together this impressive, fully functionally snowblower from scratch though; he (or was it a she?) took a LEGO Technic 6×6 All-Terrain Tow Truck, designated 42070, as a base and weaved his (or her?) magic on it to result in a working snowblower. 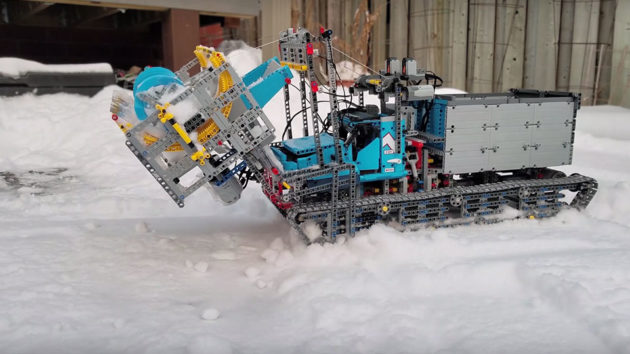 Now, as you can see in the video below, it isn’t the most efficient snowblower, but hell, it is made of LEGO, isn’t it? And that alone is impressive enough. And it is remote controlled. Sweet. It look The Brick Wall three weeks to mod the LEGO Technic 6×6 All-Terrain Tow Truck set with tracks and fitted with a custom-made snowblower. Now, if only it could load the snow on its idle truck bed, it will be cool. Though spitting it to the sides instead of the front will be just fine.

So, how long will it take for this LEGO mini snow busting machine to clear a typical driveway? Well, don’t ask. And don’t ruin it for me either. I am just enjoying being enthralled by white flakes being spit out. Go on and enjoy the said video.

NOW READ  If You Like Photography, You Will Appreciate This LEGO MOC UR-Leica Set