Remember how Kevin McCallister used Michael Jordan cutout and some mannequins to fool the would-be intruders? Well, it looks like Japanese property management company, Leo Palace 21, has lifted a page out of Home Alone (1990, Twentieth Century Fox) and did something similar with the aim to make women living alone in Tokyo feel safer. While Kevin had to deal with a bunch of strings to keep things “alive,” Leo Palace 21’s solution, called “Man on the Curtain,” is more automated – thanks to the included projector that cast a man’s moving silhouette onto the curtain that will make anyone passing by (or stalking) to believe there is a man in the house. 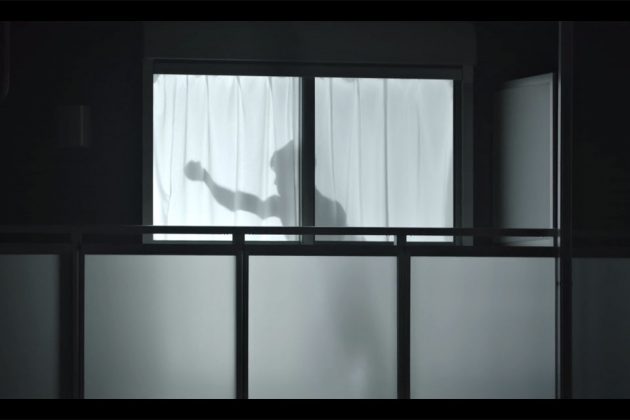 Hopefully, with the impression of someone other than a lady in the apartment, it will deter any potential intruders. This is not an April’s Fool prank, btw. Ermmm, apparently. Actually, I can’t be sure. Anywho, as you have probably noted, the man silhouette is not static. It is moving and it is not just some animated dark shadow either. Leo Palace 21 has went to length to ensure the moving image is as authentic as possible. To achieve that kind of convincing realism, the moving shadow is actually video recording of actor moving behind a white screen. All told, there are twelve different moving shadows, ranging from manly acts like a man practicing martial art or lifting weights to more mundane activities like vacuuming the floor or drinking water.

While the user may choose which one to go with first, the system can go on and play out all 12 options, each lasting for half an hour. Man, lifting weighing and kicking and punching for 30 minutes can be quite tiring, doesn’t it? In all, this “Man on the Curtain” can go on for a solid straight six hours, so it should be convincing enough that it is anything else but fake. But really, if you need six hours of “man time,” it is either you are paranoia (and you need to seek help), or you ought to call the police because you have a persistent stalker at hand.

While “Man on the Curtain” sounds like a good solution, it may not be as effective if your apartment happens to be on the ground floor since it appears to have no sound effects. Any closer, the intruder will know something is amiss. So, where can you get it? Well, it looks like you can’t, unfortunately. At this point, this “security device” is limited to Japan residents who have fill out an application form and also, there are only five prototypes to hand out. So, it is likely out-of-stock.