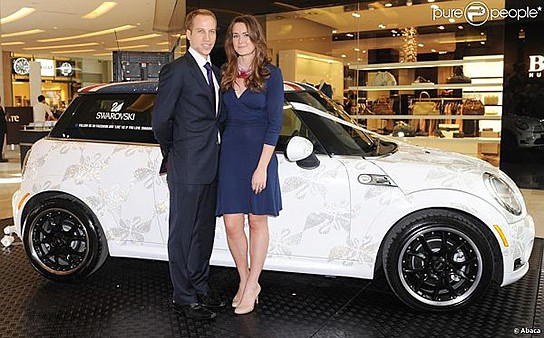 question: how to make an already outstanding car even more outstanding? why, dazzle the passerby with crystals of course! we have seen how mirrors can do to a Smart fortwo and now, here’s something designer Marco Mehn has conjured up with: a Mini Cooper S encrusted with Swarovski crystals. this is definitely going get both Mini and Swarovski crystals’ fans going gaga. no kidding. this is one car that needs a 24-hour security guard to watch over.
[ad#Google Adsense-text-468×60]

Berlin-based firm, Bling My Thing, in collaboration with Swarovski, used more 300,000 Swarovski crystals to transform a standard Mini Cooper S into this dazzling Royal Mini Cooper (yes, that’s what it is called). this particularly striking Mini sports SwanFlower patterns on its body that are covered by variety sizes of crystals. even the roof are not spared. thousands of crystals covered the entered roof, forming the most dazzling Union Jack ever. in fact, i thought the roof IS the ultimate highlight of this Royal Mini and definitely goes well with the Mini Cooper’s heritage.

the Royal Mini Cooper was presented by a Royal look-alike (read: impersonators) couple on Saturday at Westfield, London. guards! arrest those impersonators! i want that Royal Mini in my garage. just kidding. take a peek at more images of this dazzling automobile after the jump.

NOW READ  Before Mitsubishi Motors Exits U.K. Market, It Is Auctioning Away 14 Of Its Classic And Iconic Cars