Behold! The age of Robotech is upon us and the epic battle between manned giant mechanical robots may happen as soon as in a year’s time. How so? Because now the world has not only one, but two functional Mechwarrior crossed Gundam crossed Pacific Rim big-ass robots. The first, as you may have heard, is the Kuratas by Japan’s Suidobashi Heavy Industry that was reportedly sold for a million bucks and now, there’s the MegaBot Mark II by MegaBots of the United States of America. Billed as “America’s first fully-functional giant piloted robot,” the MegaBot Mark II has an uncanny likeness to the manned mechanical suit of the game Mechwarrior. 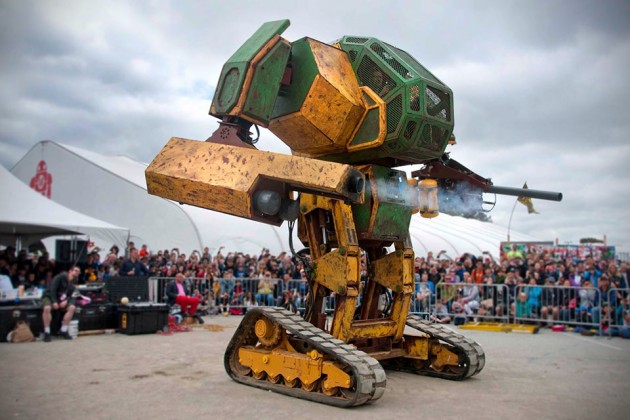 The only missing link, like the Kuratas, are the lower limbs. The MegaBot is, for the time being, on rubber tracks, while rival Japan’s iteration is on wheels. Not quite the Mech suit one might have imagined, but for practicality sake and mobility without ripping the roads, wheeled or tracked is the way to go for now. The folks over at MegaBots is not about to stop there; the plan is to bestowed legs for bipedal motion on this paintball-spitting machine. And yes, it has ‘firearms’ too; ‘big guns’ that enables the metal-clad beast to unleash three-pound paint cannonballs at over 100 miles an hour. The Japanese counterpart, which was developed since 2012, similarly is armed to the teeth and appears to be equipped with some kind of advanced targeting system with HUD.

Not deterred by the Japanese’s heritage of robotic development and obsession, MegaBots has since issued a challenge to its one and only worthy adversary through a YouTube video posted on June 30, 2015. Will the Japanese response to this challenge? No one knows for sure. If the maker of Kuratas is agreeable, then folks, we’d be a fortunate bunch to witness this history-in-the-making epic battle. Scroll down for the said video and be wowed by the MegaBot Mark II. 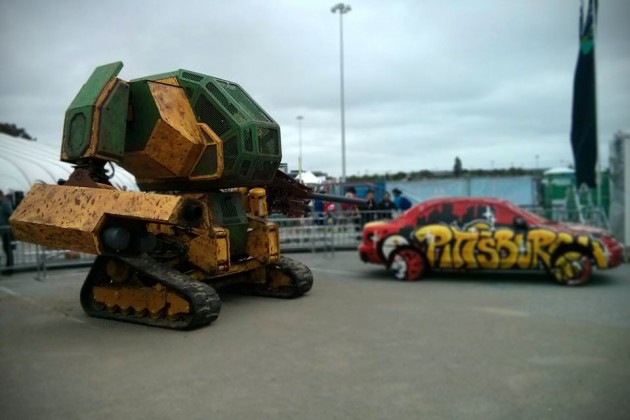