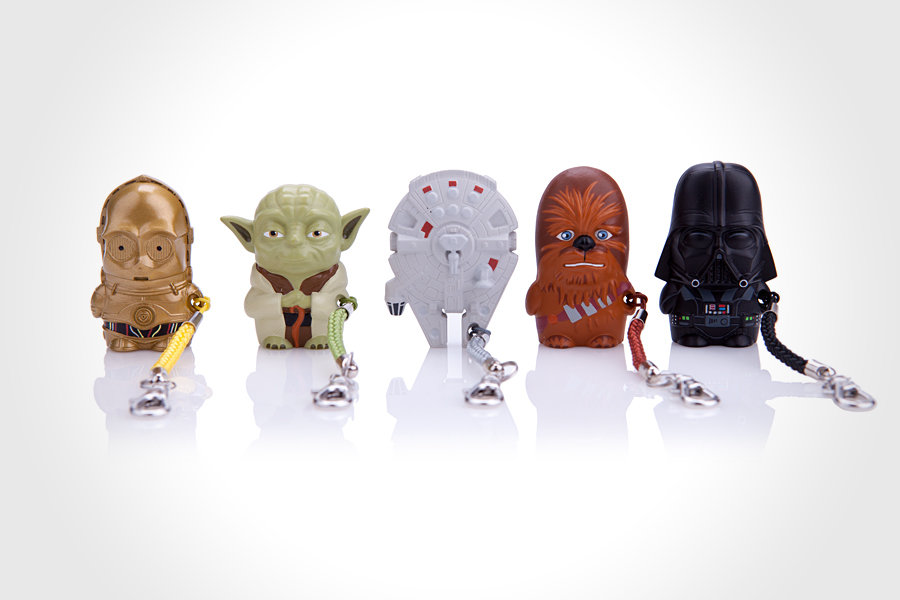 USB flash drives are a dime a dozen, hence it is hard to stand out other than going on the price war or stamping your mark of reliability on them. speaking of which, if you are not a business suited corporate head, you probably don’t need a too run-of-the-mill, mundane looking USB flash drives and instead, you can choose to treat yourself with something with little more cute factor like the MimoMicro USB Card Reader and Drive from Mimoco. showcased in the ongoing CES 2012, the MimoMicro product line is touted to be smaller, and more versatile than its Mimobot counterpart. It is a USB flash drive with interchangeable microSD memory cards and it also works just as well as a standalone microSD card reader. some of the features include cap-free design with flip-out USB plug, integrated keychain, and LED indicator. like the recent Mimobot, the MimoMicro line also goes on the cobrand route, with the first series featuring characters from Star Wars and DC Comics. Fans of these two popular franchises can expect Star Wars designs that include Darth Vader, Yoda, C3-PO, Chewbacca, the Millennium Falcon along with DC comics character, Batman, Superman, and Wonder Woman. the MimoMicro USB Flash Drive and Card Reader is slated to hit the stores this March, though price remain a mystery at the time of this posting. a few larger views after the break.

NOW READ  Montegrappa The Batman Pen: Writes With A Vengeance