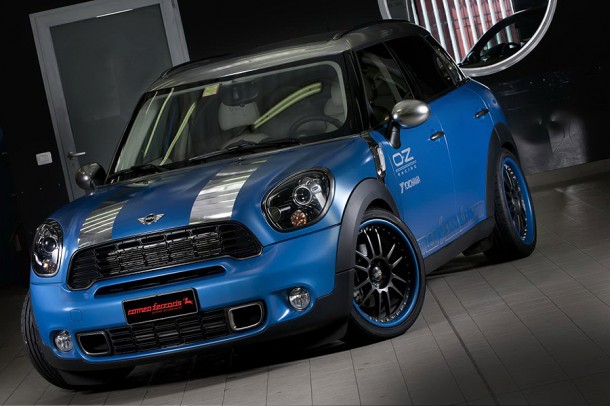 this is the first time i am featuring tuned-up works by Italian tuning house Romeo Ferraris. though quintessentially Italian, they do have their hands on a fair share of non-Italian examples, such as this Mini Countryman Cooper S tricked out in celebration of the 150th anniversary of Italian unification. never mind that the Mini is of British heritage and currently own by German auto giant, i still think this Mini Countryman Cooper S looks pretty awesomely wicked.
[ad#Google Adsense-text-468×60]

under the hood is a modified 1.6-liter turbo four that now outputs 227 horses, along with 328 Nm of torque – thanks to a chipped ECU, improved air intake and intercooler. other improvements include adjustable suspension, Brembo brakes and huge 19-inch two-tone alloy wheels (OZ Racing items, no less) shod with low-profile Yokohama rubber. the most eye-catching detail is probably the matte blue paint job accented by brushed-finish hardware. the interior is treated to white leather with very contrasting blue pipings and slight hint of the Italian colors.

i have this special affinity for Mini, not to mention anything that’s souped up, tricked out or whatever you call it. though i may never afford a Mini in this country but that doesn’t stop me from ogling over this beautiful example. it is such a beauty, you know, the matte blue paint and all, but the sunny day unfriendly chrome stripes is little off though. hit the jump and check out a few more images of this beautiful example.